Amlogic S805 is a cost down version of the popular Amlogic S802. It features four Cortex A5 cores, and quad core Mali450-MP GPU, only support 1080p resolution (no 4K), but adds hardware decoding for HEVC / H.265 at 1080p resolution, which is not possible with his big brother. In theory, I should also support Gigabit Ethernet, but none of the upcoming media players support it, allegedly because it’s not working yet… After products by the likes of Ugoos, Eny Technology. and Geniatech, it’s time for MINIX to announce their own S805 mini PC with the NEO X6. 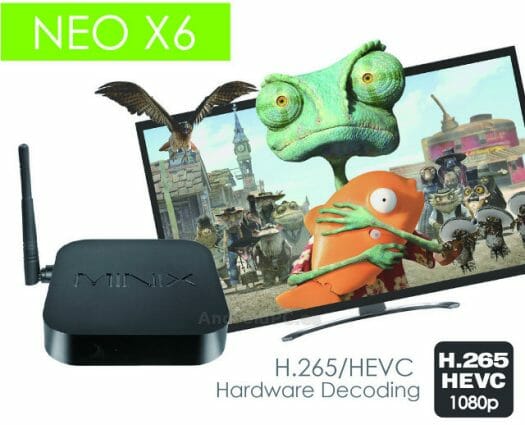 MINIX interestingly always selects the same enclosure for all their products, probably because customers complained when they tried something different last year, and most people want a discrete enclosure, with a product that does the job. The device will run Android 4.4 Kitkat with XBMC MINIX Edition, and come with an infrared remote control.

AndroidPC.es reports the box should be available on September 22, for around $119. I could not find much more information, except it’s sold on a UK based website (Fuketo) for 79.99 GBP ($130) including shipping.

Still no HEVC/H265 hardware video decode support in XBMC yet?

@Harley
I’m waiting for one S805 (week or two) or S812 (long shot…) to be able to add hevc support. It’s partially added into libraries as well as S805 chip, just no device yet to implement and test hevc…

One would think that it would be in the interest of SoC manufacturers and larger makers/resellers of media players like Geekbuying, MINIX, and Matricom to sponsor more XBMC/Kodi developers at least with hardware and early SDK availability so features like HEVC/H265 hardware video decode and HDMI-CEC support code get added to the official upstream version of XBMC as soon as possible.

@Stane1983 Cool but will that then only be for Amlogic? Or to OpenMAX IL and Android’s MediaCodec API too so that other SoCs like Rockchip RK3288 can also take advantage as soon as possible?

@Rocker
What I try is to help maintain XBMC AMLCodec, so yes, Amlogic only.

@Stane1983
Cool! But still wondering why Team-XBMC/Kodi not invited you to join them? If not then maybe you could ask to join them as an official developer for upstream? 🙂

Same question goes to other good XBMC/Kodi developers on freaktab.com and other third-party sites, if you all join official Team-XBMC/Kodi then collaboration would be better?

My main point is that we want to see the improvement in upstream mainline, not have to hunt around to find third-party builds that will work with only a few devices.

@Harley
Not to worry about it, I collaborate in XBMC/Kodi development… I’m not very big collaborator but I am. Eg, KitKat 4.4 on Amlogic platform and 4k playback using AMLCodec was my pull request to upstream which is merged in Kodi (master branch) and later improved by others. Don’t know about others.

This new tv box NEO X6 supports H.265 hard decoding but do not support 4K, it’s a pity. It appeared in another online shop iandroidtvbox.com, but has no price yet.