In the last few months, we’ve seen a few Amlogic S802 powered Android media players such as Tronsmart Vega S89, SZTomato/Eny M8, and MINIX NEO X8(-H), which have the fastest Cortex A9 processor on the market with a relatively powerful octa core Mali-450MP6 GPU, as well as 4K decoding and output capabilities. But if you’d like something a little more affordable, don’t care about 4K, and would do with a quad core SoC that’s not quite as powerful, but more power efficient, and still supports HEVC, you may consider one of the upcoming devices based on Amlogic S805. Eny Technology is one of the first company to announce an S805 media player with their EM6Q-MXQ. You can check S802 / S805 / S812 comparison for details. 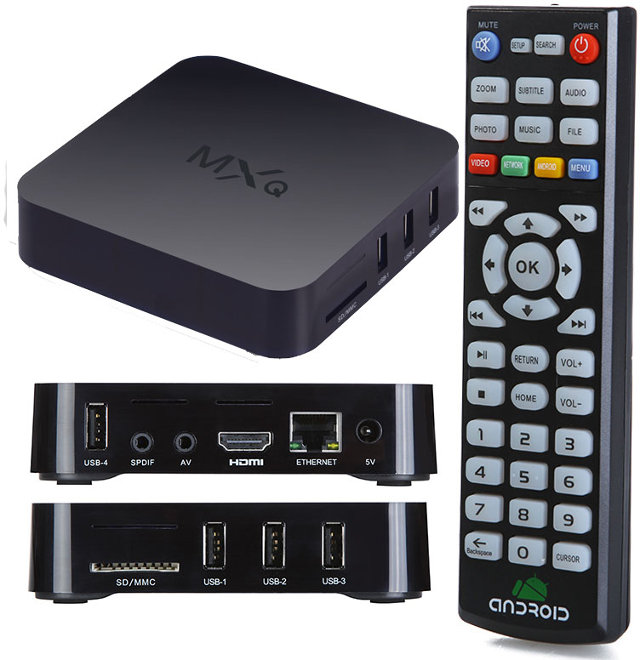 The enclosure and remote control both look pretty familiar, and the hardware specifications are quite similar to GBox Midnight MX2, except for the Amlogic S805 SoC:

EM6Q will run Android 4.4, and by default, comes with an IR remote control, a power adapter, an HDMI cable, and a user’s manual in English and Chinese. You may have noticed that S805 support Gigabit Ethernet, but I’ve been confirmed this board only supports 10/100M.

I’ve been informed that the company will start taking order (wholesale) this week, and production will take place later this month, with delivery to their customers scheduled by the end of the July, so I’m assuming individuals may be able to start buying S805 Android media player in August. I could not get pricing information at this stage. Further details may be found on Enybox EM6Q-MXQ product page. Firmware downloads should eventually be found here.

VERY NICE i just hope its going to be cheap and have good xbmc support. i think if they do the same with this as they did with the mx2 “sell cheap” it will sell alot and ther would be better xbmc support

adem :
VERY NICE i just hope its going to be cheap and have good xbmc support. i think if they do the same with this as they did with the mx2 “sell cheap” it will sell alot and ther would be better xbmc support

Price should be around 70usd and till now, the sdk and software are still sucks, xbmc gotham still don’t support.

you should see different models at the end of this month. like, tronsmart vega s85 is one of them.

also you will see tv sticks which use this chip.

I’m a little confused about the GPU cores with these Amlogic boxes. I thought that the mp# number so mp2,.mp4,mp6, etc gave the number of GPU cores. It used to anyway.
So is it just a case of some manufacturers taking liberties with the numbers or are they for real?

@The Cageybee
I made up the MP2 here, so TBH I’m not completely sure. But it’s advertised as a quad core Mali-450 GPU. The Mali-450MP6 (I did not make that up) found in S802 is advertised as Octa core GPU comprise. According to the document (p.9) below it’s composed of 6 shader cores and two vertex cores. (6+2 =eight). So the number after MP is the number of fragment processors inside the GPU.
http://www.arm.com/files/event/3_ARM_Mali-450_Introduction.pdf

@Jean-Luc Aufranc (CNXSoft)
I’d like to add that it’s not clear whether there are two vertex processors in Mali-450MP GPU, or just one.

and Shenzhen Tomato too, but they call it MXQ2 – http://www.sztomato.com/products/Android-TV-Box-Aluminum-Alloy-Casing-XBMC-H.265-decoding-MXQ2-Android-4.4-tv-box-MXQ2.html

Anyone know how to connect the box to PC?

@Hendrik
I’m not sure the box can be used as an external mass storage device (USB).
If you want to copy files, simply use ES File Explorer and connect it to a network share on your PC.

What is the HDD capacity? How many gigs?
Need to know how much movies I can store.

@Charles
I’ve tested it with a 1TB USB harddrive, but larger drives may work too.