Atmel has introduced four new MCU to its megaAVR MCU family with ATmega168PB coming first with 16KB Flash, 512 bytes EEPROM and 1KB RAM, as well as ATmega48PB, ATmega88PB and ATmega328PB to be released in Q1 2015. The new MCUs are pretty similar to the existing mega MCU with an AVR core running at 20MHz, a 10-bit ADC, an Analog Comparator, SPI, I2C, USART, etc…, but they also add a unique serial number readable from application code, the ability to wake-up from power-down mode on receipt of data on the USART interface, and improved accuracy for ADC conversion and UART signals. ATmega328PB also offers a QTouch peripheral touch controller, and on-chip debugging.

You can evaluated the new MCU thanks to ATmega168PB Xplained Mini evaluation kit which comes with the following key features: 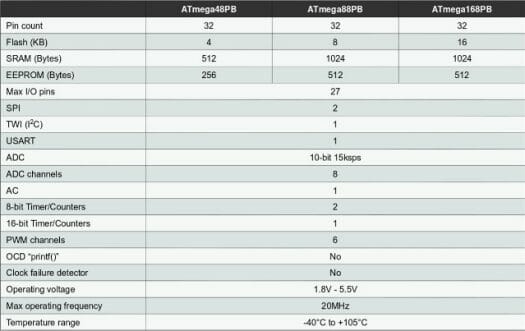 You can program (C/C++ or/and assembler), and debug the board with Atmel Studio 6.2 IDE, and access the company’s embedded software including the Atmel Software Framework, application notes, and the Atmel Gallery app store.

You can find more information about the new MEGA PB AVR MCUs on ATMEGA168PB product page, and purchase ATmega168PB Xplained Mini development board on Atmel store for $8.88.