Atmel has recently announced the Atmel SAMA5D3 series, a family of high performance, low-power microprocessor units (MPUs) based on ARM Cortex-A5 core. The SAMA5D3 series is designed for embedded applications in the industrial space, including factory and building automation, smart grid, medical and handheld terminals, as well as consumer applications such as smart watches, outdoor GPS, and DECT phones.

SAMA5D3 family has the following characteristics: 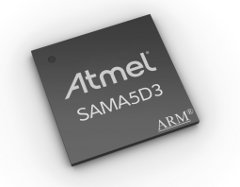 There are 4 MPUs in this series each with specific features:

They all comes with 4Gb DDR2, 2Gb NAND Flash, 128Mb NOR , 32Mb SPI Serial DataFlash, 512Kb EEPROM, and lots of connectors. SAMA5D35-EK is cheaper because it does not include a 5.0” WVGA resistive TFT LCD module. Debugging is done with J-Link and CDC on-board, and an optional JTAG test access port is available. The kits comes preloaded with Linux demonstration software and a graphical user interface (GUI) based on Qt.

As with SAM9 processors, Atmel provides 3 bootloaders (AT91Bootstrap, U-Boot and Barebox), Linux distributions, and Buildroot and OpenEmbedded/Yocto support via linux4sam.com, and an Android 4.0 port will be available at www.at91.com/android4sam in March. The If you don’t plan to use an OS for your application, the company also offers a  C-language software package (softpack). Development can be done in Windows or some Linux distributions (Ubuntu, Debian, Fedora and openSUSE). You can also access full documentation, and download the design and manufacturing Files (including schematics, gerbers, test programs…) for all 4 evaluation kits (Select “Other Documents”).

The Atmel SAMA5D3 is in mass production now, and pricing starts below $7 US for 1,000-pcs quantities. You can get more information on SAMA5D3 series microsite, and find out more about (or buy) SAMA5D3 evaluation kits on Atmel e-Store.