In order for the Internet of Things to take off, wireless connectivity solutions with ultra low power, lost cost, and small footprint are needed. Atmel seems to have made a step in the right direction by launching SmartConnect Wi-Fi modules and Zigbee SoCs featuring an ARM Cortex M0+ core. 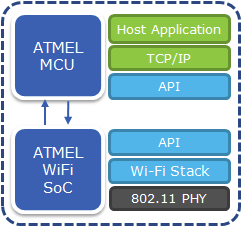 SmartConnect Wi-Fi does not appear to be a single chip solution, but instead Atmel has created a family of Wi-Fi modules integrating the company’s ultra-low power Wi-Fi SoChip with an ARM Cortex M0+ based MCU. These modules will enabled battery-powered Wi-Fi connectivity for IoT endpoints such as thermostats, and temperature sensors in a cost effective way. The company will provide a software solution with application and security protocols such as TLS, TCP/IP stack and an RTOS, all of which can be downloaded via Atmel Studio 6 Integrated Development Platform (IDP).

SmartConnect ZigBee SAM R21 combines an ARM Cortex M0+ core with a Zigbee RF receiver in a single chip which will be available in 5x5mm 32-pin and 7x7mm 48-pin packages, allowing ultra small solutions, and at the same time saving on BoM cost. These MCU can be used at high temperatures (Up to 125 C), and are suited to wireless lighting applications for instance.

SAM R21 MCUs will also be supported by the wireless composer in Atmel Studio 6, and the company has already made a low cost development board,  ATSAM R21 Xplained PRO, which will be available for $39 though the Atmel Store.

Mass production for SmartConnect Wi-Fi will start in May 2014. ATSAM R21 series are already sampling to select customers, will sample to the public in at the end of March with mass production starting in July 2014. SAM R21 MCUs will sell for $2.75 and up in 10,000-piece quantities.

I could not find much details about SmartConnect Wi-Fi, but more information is available on Atmel website via SmartConnect Zigbee SoCs and SAM R21 Xplained PRO pages.

Atmel will also present numerous other innovations at Embedded World 2014. You can check their blog for a full list.

@Harley
Just run Contiki OS and the problem is gone. 😉

@Narog
Zigbee is expensive proprietary hardware so hardware manufacturer needs to pay costly royalties to license its use which makes all Zigbee modules and units expensive. How does running a different operating system make the hardware plugs less expensive?

@Harley Maybe I´m wrong but was thinking Zigbee was a software stack that runs on top of IEEE 802.15.4 standard hardware. IEEE 802.15.4 is a standard which specifies the physical layer and media access control for low-rate wireless personal area networks (LR-WPANs). It is maintained by the IEEE 802.15 working group, which has defined it in 2003.[1] It is the basis for the ZigBee,[2] ISA100.11a,[3] WirelessHART, and MiWi specifications, each of which further extends the standard by developing the upper layers which are not defined in IEEE 802.15.4. Alternatively, it can be used with 6LoWPAN and standard Internet protocols to… Read more »