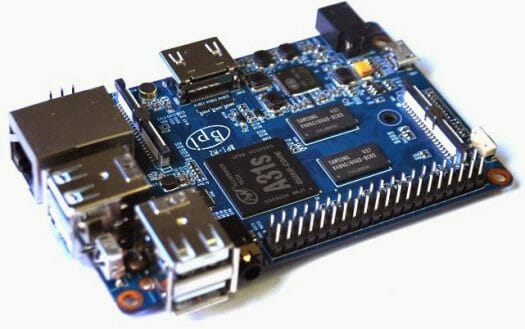 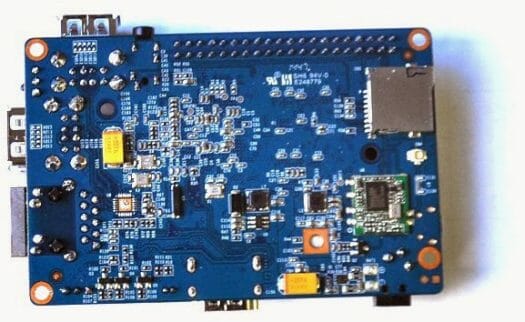 Albeit similar, components placement and board dimensions are not exactly the same as on the Raspberry Pi B+, as are mounting holes, so it may not be compatible with Hats expansion boards, and other R-Pi accessories. The board will run Android 4.2, Firefox OS, and Linux distributions, but there isn’t any information yet on bananapi.com, and I got details from G+.

Banana Pi M2 is not yet listed on SinoVoiP Aliexpress store, but one European retailer will set it for 99 Euros excluding VAT (currently out of stock). [ Update: retail price has not been confirmed yet. but volume price should be $50 per unit]

@embeddedcompute @cnxsoft Dear sir, the M2 is about 50$ /pcs, the batch production will come out soon, i will keep you update 🙂

I guess the housing won’t be compatible either: they turned the USB 90° to place an IR receiver.

@embedded_geek
No need to guess, it won’t be compatible. Would have it been so complicated to make a mechanically compatible board?

@Alessandro Benedetti
I have no idea about that, better ask on their forums or G+ page.

so obviously SATA is gone as there is no SATA on A31.

powerVr – good luck getting hardware acceleration working outside of android.

Banana PI M2 is about 50$/pcs , the first batch production will come out soon, i will keep update this for u 🙂

Hello my name is alex and i have one advice for the company that produces the banana pi. Be original don’t copy from others. What about doing a board with a mix of raspberry pi, cubieboard and odroid. A board with allwinner A33 quad core cpu or Rockchip rk3288 or Amlogic 802 and mali gpu (good for linux drivers and video hardware acceleration) sata data connector and sata power connector (no emmc or nand flash soded into the board, the client could upgrade) and 2gb ram for 32 bits operating system or 4gb of ram for 64 bits operating system… Read more »

Was a good idea on Banana Pi M1 to have SATA.
A pity this new version is lacking SATA.

I would like to know when the banana pi m2 will be available for purchase and can I pre-order a couple.