Radxa Rock Pro is a development board powered by Rockchip RK3188 quad core Cortex A9 processor, and although 2D/3D graphics acceleration via Mali-400MP4 is shown to be possible in Linux with tools like es2gears and glmark2-es2, full integration is seldom worked on, and things like WebGL may not work in web browsers. But thanks to the work of naobsd and MatchStick team, Firefox OS has been ported to this Rockchip development board, and as you’ll see in the video below, some WebGL demos work amazingly well. 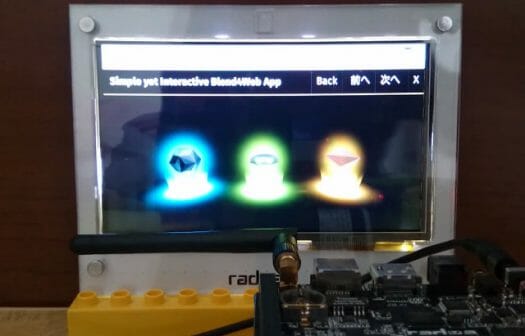 The hardware setup for this demo is comprised of Radxa Rock Pro development board, a 7″ LCD display with touchscreen, and some lego bricks :).

WebGL demos can be found @ https://developer.mozilla.org/ja/demos/tag/tech:webgl, so you could try your own platform to see how it performs.

If you own a Radxa Board Pro (or Lite), you can even build Firefox OS by yourself by following the instructions on B2G-Flingone github repo, which are simply:

[Update: naobsd said this is still work in progress, and the code in B2G-Flingone may not have the latest patchsets yet]
Merry Christmas to all !!!

at first, please read news from Radxa carefully: http://radxa.com/News/2014/12/ffos-is-running-on-rock-pro Matchstick team did/are doing Firefox OS porting work to Rockchip platform. I did NOTHING for it. What I am doing is porting it to Radxa Rock (and Rayeager PX2). it’s just started, only very initial work is done, and not finished yet. btw, Firefox OS shares lower part of Android. GPU should work as well as Android. (when porting work is done well, of course) it’s totally different to “using GPU on Linux”. I think that WebGL demo is “light”, I’m not sure it’s “amazingly” well. but, surely, it’s working well.… Read more »

…WebGL demos work amazingly well… based on 1024×600 LVDS display.
On greater res or FHD may be a problem.

Merry Xmas to all ARM users 🙂

Hello, where I can find the touch screen that I see in the video? It looks amazing

Paul :
Hello, where I can find the touch screen that I see in the video? It looks amazing

http://radxa.com/Rock/Tp,Lvds,Camera
“where to buy” section