A few month ago, a Firefox OS HDMI streaming stick (codenamed netcast) by Mozilla that would compete with Google Chromecast was previewed. It is now called Matchstick, based on Rockchip RK3066 and has just been launched on Kickstarter. 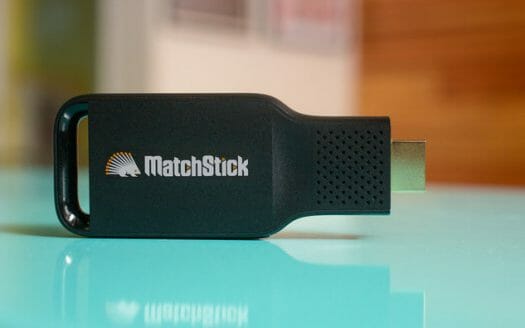 The Firefox OS dongle will come with an HDMI extension Cable, a micro USB Cable, and a 5V power adapter. The company claims MatchStick is an open source hardware device, but the schematics are only available in PDF format, at least at this stage. The board is called netcast-RK3066 in the schematics. The software however will be completely open source, except the parts that can’t be.

Based on these hardware specs, MatchStick will be more like a Chromecast, than a fully-fledged Android TV stick. It will let you stream online videos and music from services like Netflix, Youtube, Hulu, Spotify, etc… installable from MatchStick appstore, and since the platform is open to developer, more so than Chromecast, more apps should come online over time. You’ll be able to control the stick from a PC using Firefox or Chrome (mirroring or streaming), as well as Android and iOS devices.

The company has almost reached it $100,000 funding target in less than a day. The first 500 units were available for $12, but they’ll all been taken away, and you can still get a MatchStick for $18, plus $5 shipping if you live outside of the US, with delivery scheduled for February 2015. If you are not a big fan of crowdfunding platforms, the device will retail for $25. If you are a developer, you can apply for one of the 250 units the company will sent for app development. More information can also be found on MatchStick.tv website, especially with regards to software development with the API details, and SDK download link.

Thanks to Appelboor for the tip.

Is there uart pins(TX, RX and GND) or hole on the PCB? I see some holes on top edge of PCB.

I wonder is there any cheap HDMI stick which smoothly runs XBMC with hardware acceleration?

“Scam” is written all over it. To start with, $18 doesn’t cover the listed BOM, let alone added S&H expenses. And just look at the “3D-model” picture. It have a _photo_ of a real board used as a texture. So, in other words, 3D modelling _after_ a production-ready PCB is made. Really?

Extra kudos to anybody who will find out where from actual PCB they ripped for photos is coming from.

@Sceptic
I can see they used some 3D renders on Kickstater. But I doubt it’s a scam. The product is mentioned in a post on Mozilla.org, https://hacks.mozilla.org/2014/09/matchstick-brings-firefox-os-to-your-hdtv-be-the-first-to-get-a-developer-stick/, An early prototype was tested by GigaOm. The PCB picture is marked NETCAST_V20, with netcast being the Firefox OS stick codename announced in June, and there’s no reference to NETCAST_V20 on the web, so that’s probably not a board found in another device.

Having said that a proper demo video would have been nice.

It does reek of scam (lots of those on the crowd funding sites these days). Considering that thing is only 7 USD cheaper than when it ships, I will wait and see…

I made a pledge (is that correct English?), although I’m not sure they will deliver what they promise. We’ll see.

I’ve downloaded and unpacked the firmware from MatchStick’s website (http://www.matchstick.tv/developers/documents/castaway-stick.html) and it looks legit.

I can now confirm that it works 🙂 I’ve successfully installed a modified firmware on my MK808B and played a YouTube video from my phone.

If/When they deliver, it would be quite a step: for 18 US$ you can turn your TV/monitor into an *open* smart TV. I would find that impressive.

“We are going for 500 K! So we hope to incentivize everyone to help us get there by offering two of the most popular request for Matchstick, Local Play and Ad Hoc mode.

Local Play will allow you to play local content from your own local media servers that are on the same network as Matchstick. We’ll provide an easy list view so you can access your NAS, SAMBA, NFS etc. Want to build your own retrieval app, we’ll provide the API of course!”

Matchstick has passed :'( After several delays, backers received yesterday an email announcing that the project was to be terminated shortly and that refund would be proceeded in the next months.

@Thomas
Sad. Here’s the link to the update on Kickstarter -> https://www.kickstarter.com/projects/matchstick/matchstick-the-streaming-stick-built-on-firefox-os/posts/1266549