Asus Nexus Player is the first consumer device running Android TV, which itself is a subset of Android 5.0 but focusing on usability and user experience for the TV. That means anything that works on this Intel based media player should work pretty well, but for the same reasons Android TV has limited features compared to Android 5.0 operating system used in tablets or smartphones. So the developer of Droidmote app decided to get a Nexus Player, and port the full version of Android 5.0 to it, and called it Nexus Player LolliRock. 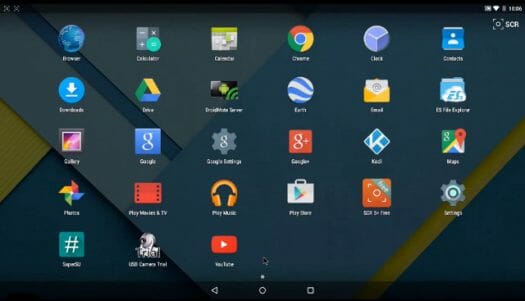 The Linux kernel used in this firmware support NTFS, NFS, CIFS, and F2FS file systems as well as USB webcam and USB audio, and LolliRock is based on AOSP source code, includes Google Play, and you can transfer files between the device and your PC via USB. It’s still a preliminary version, and a few things still need to be improved such as the HAL for USB webcam in order to have Google Hangout working, and support for external USB and Bluetooth microphones.

If you own a Nexus Player, and you’d like to give a try, download Nexus Player LolliRock v.1.1, put the device in bootloader mode, and flash the firmware with fastboot:

If you want to root the device, download root.img, and flash it with fastboot: