XBMC/Kodi for Android has come a long way, but it’s still missing some features of Kodi Linux, such as Live TV (DVB) and  video recording (PVR) function that so far could only be supported in Linux port of Kodi such as OpenELEC linux distributions, simply because PVR backends such as TVHeadend were not available for Android. 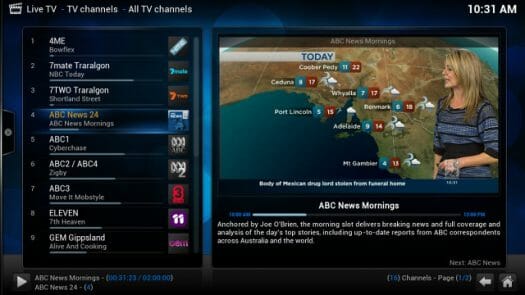 Now the good news is that Freaktab user’s Taki has posted instructions to install TVHeadend server for RK3288. So if you have a compatible USB Tuner, you should be able to watch live TV on your Rockchip RK3288 based TV box. After the server is installed, you’d also need to  install TVHeadend PVR client addon, and complete the installation with some extra configuration steps. This was tested at least in SPMC with a Tronsmart Orion R28 with IT9135 DVB-T tuner. I’ve also found a thread about RK3188 support.

For owners of their WeTek Play even more intereasting is an Android 5.0 (Lollipop) image with DVBAPI support to enable run apps like Tvheadend, including DVB drivers and use those from WeTek Play’s OpenELEC builds of Linux.

The link has disappeared 🙁

The Kodi wiki says no official Android ports yet for any listed PVR backends, but maybe there are specific working ports ?

Any chance we could get this to work with ATSC (North America)?

Oops.. Now saw in the article is support ATSC.. My bad!