XBMC (name) is definitely dead, as developers of the popular open source “entertainment center” project have announced the first stable Kodi release – the new name of XBMC – with XBMC 14.0 Helix. 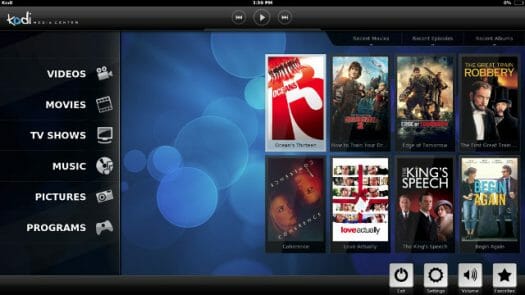 Key changes and new features include:

Kodi 14.0 is available for download for Windows, Linux, Mac OSX, Android (ARM and x86),  Raspberry Pi, iOS, ATV2, and there’s also KodiBuntu, a Linux distribution pre-installed with Kodi. There’s still no announcement of a release of Kodi on Google Play Store, but you should be able to install SMPC 14 from the Play Store, a fork of Kodi with some patchsets for H.265 hardware decoding, and more.

Important! If you update from XBMC 13.2 to Kodi 14.0 make sure you back your setup first, for example with XBMC Backup add-on, because there’s no easy way to revert from Kodi 14.0 to XBMC 13.2 in case you change your mind. There may also be issues with skins resulting in a blank software keyboard, in that case try a new skin.

There will soon be minor releases Kodi 14.1, 14.2, etc.. for bug fixes, and Kodi 15 will be the next major release, whose name has apparently been chosen from that long list of suggestions, but not announced yet.

What percentage of Kodi uploads of streams are now H.265? Also, what monthly/yearly estimates of H.264 streams will be changed to H.265 over the next year or two? What do you guys think?

@NIPSZX I don’t have an exact answer to your question. But if you are old enough, you may remember transition from MPEG-2 to MPEG-4 took many years (for satellite / terrestrial TV). With broadband internet now, H.265 / VP9 might take off faster, especially YouTube is already using the latter. So my guess is that traditional TV delivery systems like cable, terrestrial, and satellite may take several years before supporting the new codecs, but online it’s just starting now. Online video services should be able to detect the codecs supported by your hardware, and deliver H.265 or VP9 if your… Read more »

Koying wrote “Once I’m sure there are no major issues, I’ll publish in stores.”

Those Helix builds will contain XBMC patches which were not accepted, or are not acceptable, in the main XBMC tree.