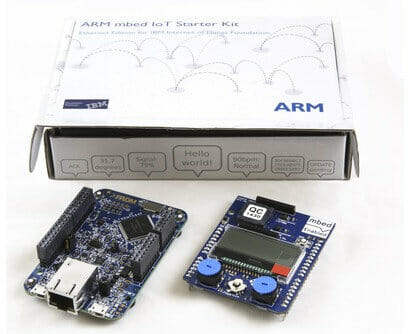 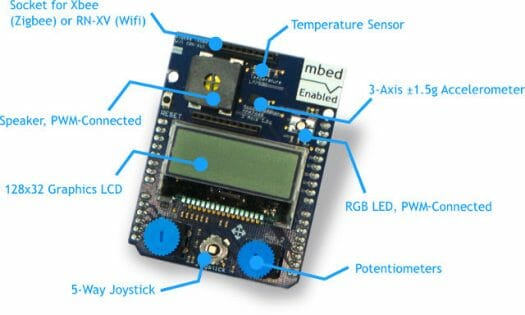 The board also features a programmable OpenSDAv2 debug circuit supporting the CMSIS-DAP Interface software that provides a mass storage device (MSD) flash programming interface, or a CMSIS-DAP debug interface, or a virtual serial port interface. The board also support RF and Bluetooth add-on module but these are not included in the IoT kit, and instead a shield is provided with a 128×64 graphics LCD, two potentiometers, a joystick button, a PWM connected speaker, a 3-axis accelerometer, an RGB LED (connected via PWM), and a temperature sensor. A Xbee socket can be used to connect a Zigbee or WiFi module.

Getting started with the board is very easy. Connect the two boards, add an Ethernet cable, and a USB connection to your PC. The board will show as a storage device, and you can open IBM.html file to start the user interface in your web browser and monitor and play with the sensor and other hardware parts. 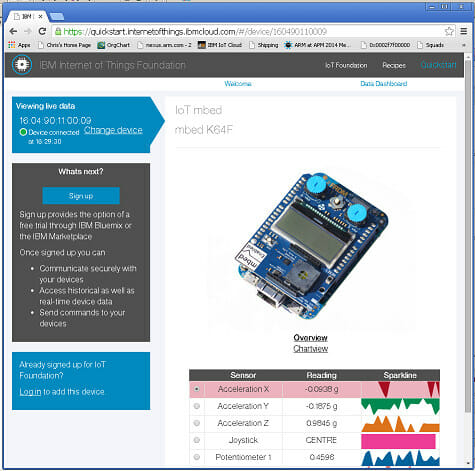 Development is done via Eclipse and Mbed SDK. Pricing and avaibility have not been disclosed so far, but as reference FRDM-K64F board can be purchased separately for $35, and mbed Application Shield for 31 GBP exc. VAT, so the kit could go for around $80.

Further details can be found on mbed’s IBM Ethernet Kit page as well as a dedicated page on IBM website also including hardware design files.