GroBotz makes me think of Lego applied to robotics. The project consists of modules such as motors, sensors, buttons, switches, or cameras that snap together in order to create a robot on wheels, games, toys, a musical instrument, or whatever idea you may have, and the hardware is then programmed using a graphical user interface.

A Raspberry Pi board is used for the brain of the robot, and Microchip PIC MCUs for the smart blocks. The software is programmed in C# using Xamarin, the user interface is based on Unity, OpenCV is used for image processing, and during development a plastic part where printed with Makerbot, and schematics and PCB layout designed with CadSoft EAGLE.

The company has now come up with a number of modules as shown in the picture below. 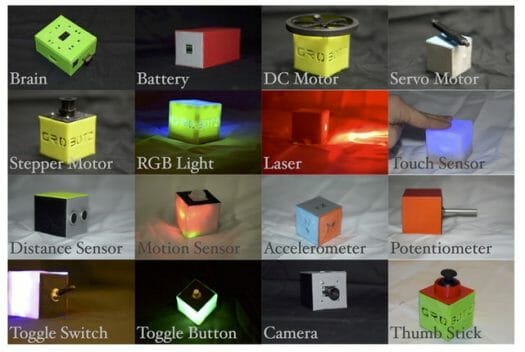 Your robot can then be controlled over Wi-Fi with GroBotz app which works on Windows, Mac OS, iOs, Android and Linux devices. The software provide a “wire editor” to link up to 127 modules together, and define the robot’s behavior. For example, you can wire a motor module to a joystick module, and easily control the motor with the joystick. 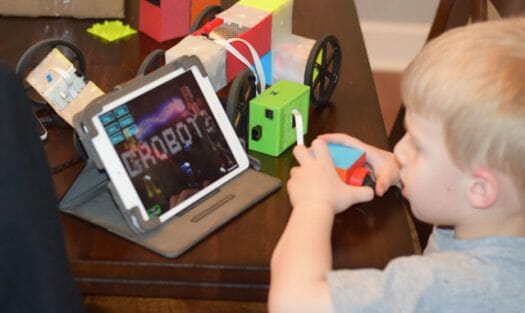 GroBotz has just been launched on KickStarter, where the developers look to raise at least $300,000 to go ahead with production. The simplest kit is composed of Light Game Cube and battery with a GroBotz T-Shirt and builders cube (which must be the plastic enclosure for the module), and requires a $50 pledge, but if you want something a bit more fun like the GroBie shown on the first picture, you’ll need to pledge $100 in order to receive 2 DC Motors, a brain  (Raspberry Pi), a battery and charger, a caster, and 2 wheels, and there are other rewards with for example $500 for 30 building blocks. Delivery is scheduled for August to October 2015 depending on the chosen perk. You may also want to visit grobotz.com for a few more details.