The relatively popular Amlogic S805 and S812 Cortex A9 processors are soon going to be joined by Amlogic S905 and S912 processors, both featuring ARM Cortex A53 64-bit cores, with the former destined to entry-level media players, and the latter for higher end devices including 4K60 / HDMI 2.0 support, as well as H.265 and AVS+ hardware video codecs. The company is now showcasing its new processors at China Content Broadcasting Network Exhibition (CCBN) 2015 in Beijing until March 28. 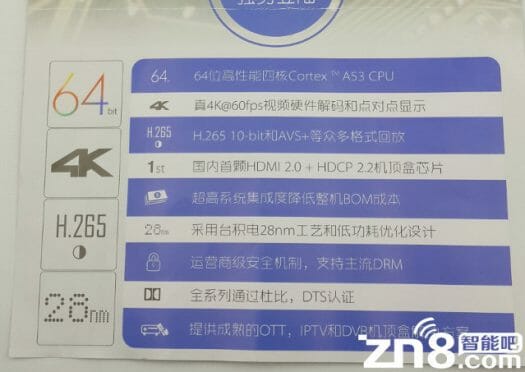 Details are sparse, but we still know a few features for the new Amlogic 64-bit ARM processors:

. Both processors support 4K video output and deocding. Linux and Android 5.1 SDK will be released for both processors. S905 processor will allegedly be power efficient enough to make it into HDMI dongles too.

Mass production of S905 devices should start in Q2 2015, while high-performance media players based on S912 should become available in Q3 2015.

Information about the S905 and S912 is only available on Chinese websites such as DVBCN, which interviewed Gordon Pan, VP at Amlogic.

It all depends on tegra X1, if it will be only for nvidia console these things will have a market, elsewhere if linux can be put on tegra x1 (20nm maxwell graphics) for a price just a little higher than what needed for S912….

More info: These will be refresh versions of their existing low-power S805 and high-performance S812 SoCs. These new S905 and S912 SoCs feature true 4K at 60 fps with 60Hz output. Both of these support mainstream DRM, such as Google’s Widevine, Microsoft PlayReady, Verimatrix, Marlin, “and so on”.

Not related to next gen platform entirely, aml will introduce newer long term supported kernel. Last info I have from Aml engineer that it will be 3.14 probably, but that was before 3.18 was chosen for long term support.

S905 looks really good, but S912 is underpowered by the GPU…

No OpenGL ES v3 support,no money from my part

@DaXo
but still they sell it cheap

Of course it will be cheap because it’s old tehnology 28nm, Mali450 …

@natsu
If true then I guess it’s primary designed for media players and set-top boxes, and not really meant for making Android game console combo devices.

@Harley
no, not that, I don’t care about Android games either, but having KODI running at 60fps silky smooth is very important for the user experience

@natsu Well a Quad-Core ARM Mali-450 MP2 GPU running at 750 MHz should be more enough graphics power for Kodi to render the most complexed even if inefficiently written skins for XBMC/Kodi as long as the skin resolution is only native 1080p. Upscaling all and any 1080p skins to 4K/UltraHD should work fine too, but I don’t believe there are any native 4K/UltraHD skins available for XBMC/Kodi yet, however most such skins should work too. The GUI engine in Kodi/XBMC have been vastly improved to run more efficient on embedded system with every new version ever since Raspberry Pi proved… Read more »

@Harley
I’ve seldom seen the default skin rendered @ 60 Hz in Kodi Android. More often that not it’s around 30 fps in the System Info section, but I still find it’s OK to use.

@Jean-Luc Aufranc (CNXSoft)
30fps is ok but, I like the butter smooth rendering on my intel HD4000 and allwinner A80, is a constant 60 FPS, the difference is obvious, and feels great to use

@Jean-Luc Aufranc (CNXSoft)
very nice GPU, finally, Amlogic is stepping up in the game
then, I think the GPU will be the main difference between the S905 and the low end S912, crossing finger for a nice clocks boost for the latter

Does anyone know anymore detail information about S905?
It’s bandwidth? 32bit LPDDR3 or 64 bit LPDDR3?
According to the specification, it supports TRUE 4K60 decoder and 4K60 display. Is it possible to support it with 32bit LPDDR3?

Amlogic S908 might be in the works with 3TS and 3 demux for dual tuner support with time-shifting/PVR.
That’s all I know so far.

So the S908 is the new rumoured variation of the S905 ?
Is VP9 capability given from some new hardware capability that can’t be added using firmware to the S905 ?
and the obvious question: DD/DTS licenses ? (or will that be a a different S908-H )
cheers