Sports camera are quite popular these days, and so are selfie sticks for better or worse… So a Korean team had a simple-yet-clever idea to combine both into a flexible camera that can be used as a selfie stick, and an action camera that does not require any accessories. You just need bend and roll the “stick” around an object. It’s cute too. Meet Flex Cam PIC.

Preliminary technical specifications of the camera:

The specifications are not overwhelming, but it still looks like a fun product. It’s also unclear whether it can record audio.

You can control the camera with a button located on the other end in order to turn off / on (long press), take a photo (short press), or record a video (two short presses), and if you’ve put the camera on a running cat or dog, you can also control it via Bluetooth with your Android or iOS smartphone. 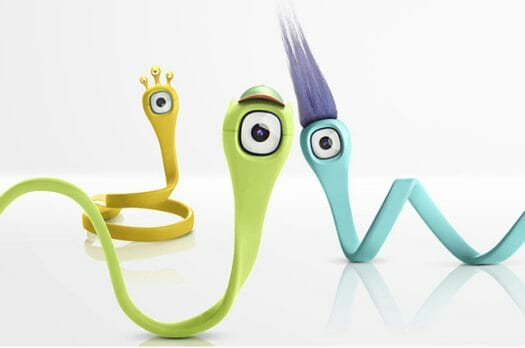 The “PICASSO project team” launched Flex Cam PIC on Indiegogo yesterday. They’ve already well passed through their $10,000 funding target, and all early bird rewards are gone. You can still get a basic PIC for $79, and a character PIC (as shown above) for $89. Worldwide shipping is included in the price, and delivery is scheduled for September 2015. People who have pledged so far were not asked about the color or character, so the company would have to contact them asking for details before they are ready to ship, which is likely to bring some confusion.

Beside the Indiegogo page, there’s also Flex Cam PIC website. Check out some use cases, and video samples in the video below.