Rockchip has announced a new WiFi SoC for IoT applications claiming 85% lower power consumption compared to competing WiFi solutions, which allows cell-coin battery powered WiFi systems thanks to a power consumption equivalent to what you’d get with a Bluetooth 4.0 LE system. 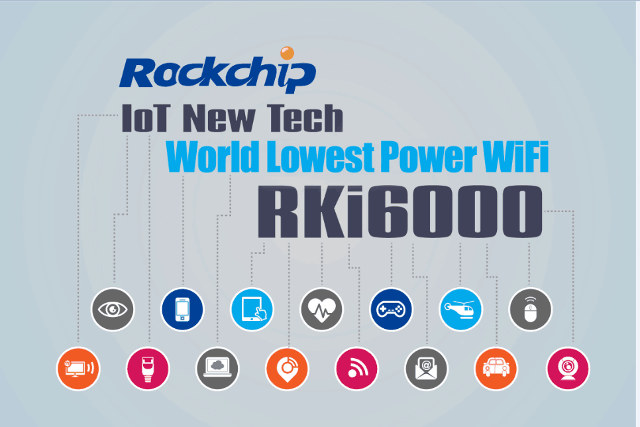 Rockchip RKi6000 is said to consume 20 mA (@ 3.3V) during Rx operations. The SoC has been developed with an unnamed third party, and can achieve a lower power consumption thanks to three improvements:

Anandtech also compared Rockchip RKi6000 to other WiFi solutions, as well as Bluetooth 4.0 and Zigbee chips by TI and CSR, and if numbers are true, then Rockchip may have disrupted the market provided the price is right.

Rockchip did not mention transmit power at all in the press release, so either Anandtech obtained this info from Rockchip, or they just assumed Tx and Rx power would be similar.

RKi6000 is expected to be used in smart wearable devices, consumer electronics, mainstream appliances, home safety, automation systems, automobiles and medical equipment. Pricing information has not been released, but RKi6000 will become available in Q3 2015.

Thanks to Nanik for the tip

One problem with this chart is that it uses TI’s previous generation BLE chip. The current one is:
– Active-mode TX at 0 dBm: 6.1 mA, RX mode 5.9mA.

Those numbers are one third of the Rockchip numbers and TI is only saying seven years on a battery.

putting 802.11b elements on your network is going to seriously bog down more modern devices, i believe.

yes, the router will switch to legacy mode

Jon, even using only third of the power , the TI chip will use 100nj/bit, while rockchip caims 6nj/bit.