Acer Revo Build is a mini PC that looks similar to Intel NUC, and powered by Intel Celeron N3050, Celeron N3150, or Pentium N3700 Braswell processor with 32GB eMMC and 8GB RAM, that looks like that: 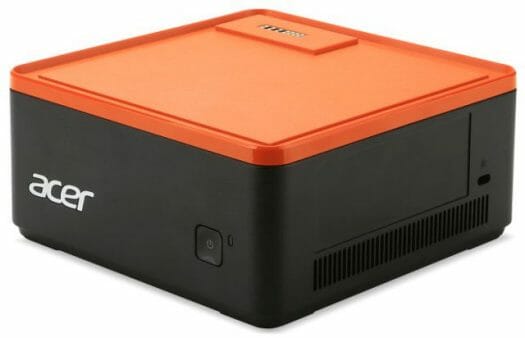 Nice colors… but at first glance it’s just another mini PC with more a recent recent processor and more RAM than usual, until you notice a connector on the top corner of the device no the picture above. That connector is used to stack other blocks such as:

So eventually, your mini PC could look more like a mini tower… 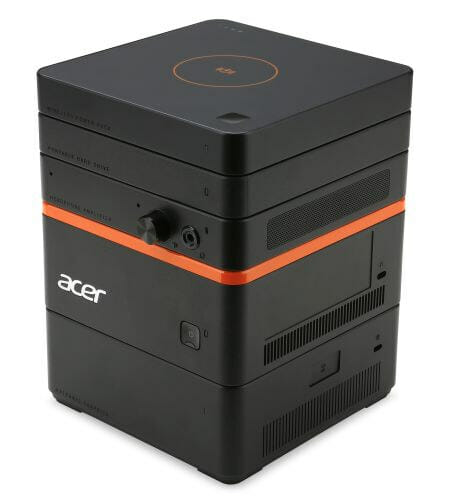 Acer modular mini PC will launch in October in Europe, Middle East and Africa for 199 Euros, and in December in China for 1,999 Yuan. Pricing about the blocks is unknown. The company also plans to launch the computer in the US, but availability and pricing haven’t been announced yet.

Neat! Except for the W10 part, would have preferred it if it were available to buy a blank so I can put Kubuntu on it 🙂
But I do like the trend of mini-pc’s and especially modular ones 🙂

Maybe they made a mistake…

The modular REVO box somehow looks awfully similar to EzeeCube which we crowd funded on Indiegogo 15 months ago. Are there really no original ideas? Or the big squashing the small?

We use pogo pins, magnetic, modular, stack… What a co-incidence. Support us instead please~

That is rather low capacity now that 2 TB is becoming the more usual capacity for “external” drives (even 2.5 incha) and internal 3.5 inch hard disk drives being readily available in 4 TB and now even 6 TB sizes.

@Alfred Braithewaite
How is 500GB not enough for a general use personal computer?

If you want to hoard shared videos or graphically intensive video games there are better solutions. This is not a workstation either.