Yesterday, Intel and Intel had a press event about Chrome OS devices where Google discussed the success of Chrome OS, and Intel showed existing and upcoming Chromebooks based on Haswell and Bay Trail processors. 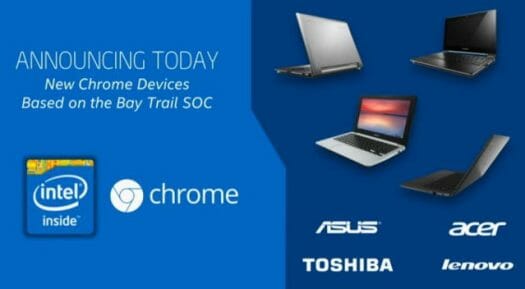 After a short introduction by Intel, Google took the stage to discuss the commercial success of Chromebooks which are now found in 10,000 schools, and are among the best selling and best rated laptops on Amazon, as well as key advantages and features of Chrome OS: fast boot, new version every 6 weeks, and after offline support for google docs, soon offline support for video playback.

Intel then continued by showing off some existing Haswell Chromebooks, a new HP Chromebox to become available in June, and LG All-in-One Chromebase with a 22″ display, Haswell Celeron 2955U processor, 2GB RAM, and 16GB SDD to sell later this month for $349. The company took a break from product announcement showing one upcoming Intel Core i3 Chromebook against a “non-intel” Chromebook showing how the ARM based device struggled with Google Hangouts + email, and some HTML5 3D games against a smooth experience with the Intel Chromebook, providing up to 4x more performance for web applications.

The product used for the demo turned out to be an Acer C720 Chromebook with an Intel Core i3 processor. Dell is also planning a Core i3 models, but at this stage the companies did not release much information, but we do know these models should start selling for $349 this summer. 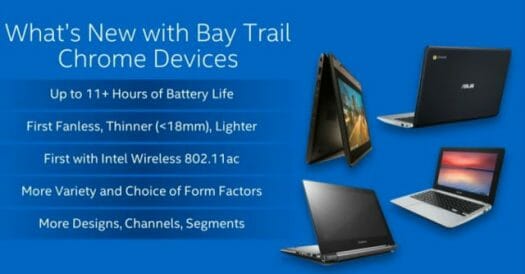 But the bulk of new products will be based on Bay Trail processors with at least seven new models:

Beside the low power and cost brought about by Intel Bay Trail processors, Intel claims all Bay Trail Chromebooks will share the following characteristics:

Via Liliputing, Chrome Stories and various places on the web.

As long as the storage isn’t soldered down this is a wonderful news for Linux users.
I think that 2GB RAM and 32GB ssd will be great for Gnome 3+ but 4GB model will be perfect (at least for Arch when once in a while you build packages from AUR in /tmp).

Myself, I’ll be recieving next week the C720 (not the new i3 model) with 4GB RAM that will replace my Samsung Chromebook.