Numato Lab is a Bangalore based company specializing in MCU and FPGA boards such as the low cost Mimas V2 Spartan 6 board, and their latest board is also based on a Spartan 6 FPGA, but a more powerful part with LX45T FPGA, and targets video applications with two HDMI inputs, two HDMI outputs, one DisplayPort output, and one DisplayPort input, among other interfaces. 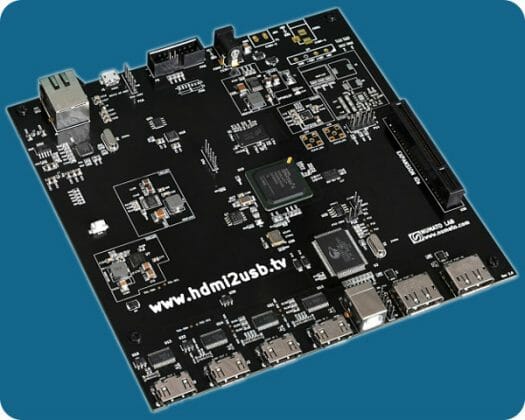 Instead of simply listing specifications of Numato Opsis, I’ll reproduce a table – drawn by Numato – showing Opsis features and specifications against some other FPGA video platforms.

The mini-ITX board has been designed using KiCad open source software tool, and hardware design files can be found on github. The default firmware, also free and open source, is called HDMI2USB.tv and allows users to record video from HDMI or DisplayPort inputs to a computer (the board emulates a UVC webcam), while simultaneously outputting the input to multiple video outputs, which can be very useful for conferences. A more advanced scenario would be to have two video inputs with one HDMI camera capturing the speaker, with the other HDMI input connected to his laptop to show the presentation slides, and the system would switch between the two inputs as needed, while broadcasting the video to various outputs.

Beside being used as a video platform, the board can also be used for various other tasks as a Xilinx FPGA development board with high-speed transceivers, expansion I/Os and more.

The project has launched on Crowdsupply platform, where the company aims to raise a mere $8,725. Numato Opsis board requires a $349 pledge with free shipping to the US, and $15 to the rest of the world. Delivery is scheduled for December 2015.

This Numato board has a lot in common with Milymist, who was developed by a friend of Mine, lekernel:

@zoobab
Opsis was inspired by your friend’s platform:

The Numato Opsis hardware has a large amount in common with the Milkymist developed hardware, being built around the same FPGA core and designed for high-speed video manipulation. With support for the Opsis board currently being added to the MiSoC firmware, the Opsis makes a great candidate to fulfil the vision of the original Milkymist platform.

USB 2.0 seems to be too slow for multi-stream capturing.