Qualcomm has recently announced the latest version of its Quick Charge technology that allows to charge supported smartphones much faster than typical smartphones using a 5V charger. The company claims that Quick Charge 3.0 enabled smartphones can typicallly charge from zero to 80 percent in about 35 minutes compared to almost 90 minutes with conventional devices. 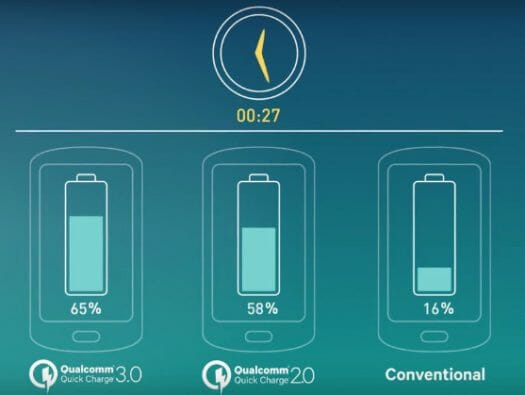 Quick Charge 3.0 adds support for Intelligent Negotiation for Optimum Voltage (INOV), a new algorithm developed by Qualcomm Technologies that allows mobile devices to request optimal power transfer (3.6V to 20V in 200mV increments), while maximizing efficiency, which – together with other improvements – increases power efficient by 38% compared to Quick Charge 2.0, and allows charging the device twice as fast as possible with Quick Charge 1.0. That means the voltage and amperage will change during charging between 3.6V to 20V by 200mV increments, instead of 5V, 9V, 12V, and 20V for QC 2.0. Tronsmart reports that when using their Quick Charge 3.0 adapter on a supported phone, the charge starts at 9V/2A, and then the voltage will slowly decrease to 5V until the battery is fully charged. The current will also vary from 2A to 3A during charge.