We already knew the audio jack on your mobile device was not only for your headset, thanks to small items like Pressy hardware button. But it’s actually possible to do much more, as shown by NXP smartphone quick-jack solution, a board that can interface sensors to your Android smartphone / tablet or iPhone / iPad via the headphone/microphone jack of your device. The company claims it can be used for various applications such as cloud-based tracking of sensor data, external input devices to smartphone, wearable health monitors, personal exercise trackers, handheld weather stations, handheld inventory monitors, handheld/portable POS devices, and universal remote controls, using powered harvested from the audio jack, and optionally a battery. 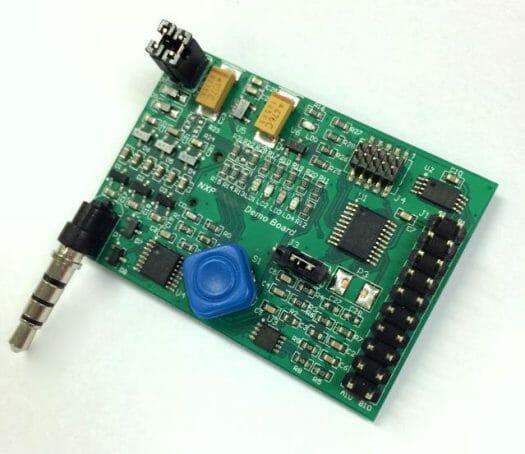 Let’s go through the hardware specifications of this little board codenamed OM13069:

In order to get started with the board, an demo application called “NXP Quick-Jack” is available on iTunes App Storeand will eventually show up on Google Play. The source code for these demo apps, as well as the firmware are available on http://www.lpcware.com/quick-jack, where you’ll also find documentation, and hardware design files such as schematics (PDF), and Gerber files.

If you wonder how this all work via the audio jack, NXP has provided a short explanation:

A power-efficient LPC812 microcontroller is programmed to transmit and receive data to/from the phone using the audio jack. Transmission uses the familiar Manchester Coding format to ensure convenient, reliable operation. The microcontroller automatically identifies microphone (MIC) and ground (GND), for quick and easy operation. The energy-harvesting block uses the right channel of the audio jack to output a 21.3 kHz sine waveform. The block rectifies the signal and generates a DC output. The Quick-Jack board can also use a button battery for power when the phone isn’t available.

This project has been inspired by  the University of Michigan’s Project HiJack.

You can watch a short demo with an iPhone 4s in the video below.

NXP OM13069 demo board will be available in June via NXP’s distributors. You can find more information, and order soon on OM13069 Quick-Jack board page. The company will also host a competition whereby designers can submit ideas and enter a free drawing to win one of five boards. The press release claims the contest is now open and entries will be accepted until June 20, 2014, but I could not find any links to apply.

(But don’t appear to have been hacked.)

Would be cool if it would also be supported by Python on Android (Py4A / QPython).