Google released the original ChromeCast in 2013. The $35 device allows users to stream online video from your smartphone to your big TV, and since then Google and the community has brought various improvement to make more with the device, and thousands of apps can be installed in the little device. Google has now released a new ChromeCast, as well as ChromeCast Audio to stream audio to speakers.

The hardware has been upgraded but the complete specifications are not available, but we do know ChromeCast 2.0 support 802.11 b/g/n and 802.11ac for higher quality 1080p video streaming, and Marvell tweeted about the new ChromeCast devices, so it’s likely another Marvell SoC has been used, [Update: ChromeCast 2.0 is based on Armada 1500 Mini Plus (88DE3006) dual core Cortex A7 processor] The new ChromeCast still works with iPhones, iPads, Android phones and tablets, Mac and Windows laptops, and Chromebooks. 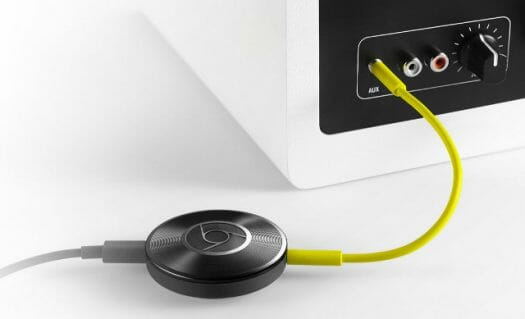 ChromeCast audio does what ChromeCast did for video and TV, but replaces the HDMI port by an audio jack to stream audio to speakers. ChromeCast Audio also sport 802.11ac WiFi, and supports RCA, 3.5 mm jack and optical S/PDIF speakers. Like the ChromeCast, it takes 5V @ 1 A via a micro USB connector. It can stream music from local audio files or online services like Pandora, Google Play Music, iHeartRadio and Rdio. Wi-Fi audio streamers, such as SoundMate M2, or WM201 (EZMusic), have been around for a while, but Google solution probably makes it easier to use.

You can find more details on ChromeCast product page.

@massimo
Don’t get too excited, there’s a “maybe” in the sentence. I just guessed after looking for a Marvell SoC with 802.11ac support. Thinking through a little more, they may have just used the same 88DE3005 SoC as in ChromeCast 1, and interfaced it with a 802.11ac chip. ARMADA 1500 Plus might be over the top, and too expensive for that application.

@Jean-Luc Aufranc (CNXSoft)
Finally the processor is not Marvell Armada 1500 Plus, but Marvell Armada 1500 Mini Plus that does include Qdeo video processing too…
Source: http://www.anandtech.com/show/9688/googles-chromecast-2-is-powered-by-marvells-armada-1500-mini-plus-dual-cortexa7