Rockchip processors are usually found in tablets and TV boxes, but one Shenzhen based company called Reeman has designed Playmate robot for kids powered by Rockchip RK3288 processor, which can take picture, sing, dance, tell stories, be used for video chat, and goes to recharge itself automatically when the batteries are low. 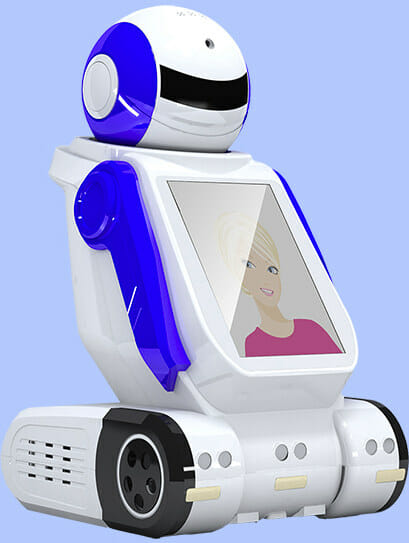 The Rockchip processor takes care of a 10.1″ touchscreen display, stereo microphones, speakers, camera, and artificial intelligence which recognizes Chinese and to a lesser extend English language, and take relevant actions, while the motors and sensors are managed by a few ARM Cortex M3 micro-controllers. The robot is still in development, and the company is working on adding a 3D camera to recognize objects, which will allow the robot to find its charging dock among other things.

You can visit Reeman Playmate product page if you will, but currently there’s virtually no information.

Amazing. Would love to have one for my kids, but it’s a pitty if the robo can’t understand English 🙁

@Fossxplorer
hopefully Google makes a version of Android for robots like this one, with hooks, APIs or all that is needed to nicely drive robots, and included would be Google Now type of natural conversation mode with Google’s AI for what to trigger as a user says something that should trigger something. Also with robotics apps in Google Robotics Play Store, more Android apps for 3D camera and a nice way to smoothly trigger something from one app to the other.