ESP8266 WiFi modules are very popular in the maker community, but so far I have not seen it in any devices myself, until I saw a tweet from @EspressifSystem about a Mini K smart socket. A search on Aliexpress lead me to two devices made by Konke, who also made Kankun KK-SP3 WiFi socket, with Mini K and Mini Pro smart sockets. 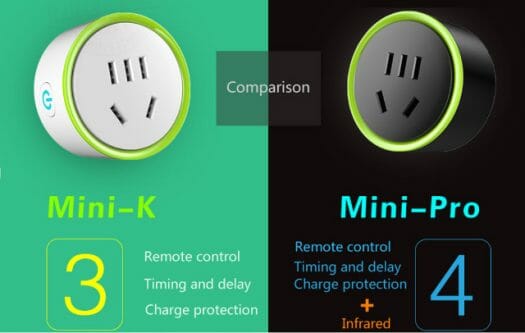 Both models has basically the same features, except Mini-Pro adds infrared support:

Both devices support on/off timers, cyclical delays and charge protection (turns off when devices are charged) with the Android or iOS app. I understand an infrared transmitter in the pro model can be used to control other devices such as air conditioners or TVs, just like Xiaomi Smart Remote Center. I’ve installed the app on my phone, and unfortunately the app appears to be in Chinese only. Maybe an English version will come later.

There’s no definite proof the module is based on ESP8266, but there are a few internal pictures available on the Internet showing a KK3000 module with Konke logo. 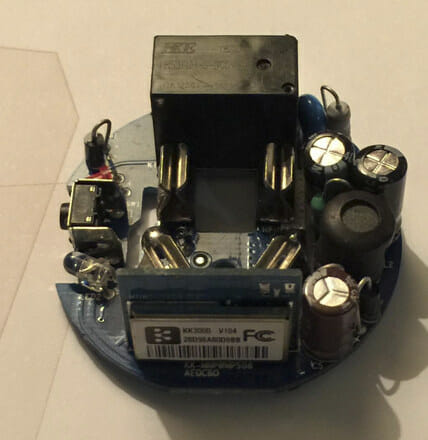 One reader pointed me to KK3000 module FCC page where we can find more pictures and technical details including the pinout of the module’s edge connector with UART pins (A3 / A4), 10 GPIOs, and GND / 3.3V.

The processor is said to run FreeRTOS with the processor clocked at 160 MHz, which are indeed Espressif ESP8266 CPU’s clock and the OS used in ESP8266 SDK, and the module also includes 128KB RAM and 1MB flash.

Konke Mini K and Mini Pro sell respectively for $13.99 and $18.99 on Aliexpress, including shipping and a plug adapter for your country, but if you want to save a few bucks, I could also find Mini K on GearBest for $10.77, and Mini Pro for $16 without the extra plug adapter. Mini K smart socket is also listed on Amazon US. More details may be found on Konke Mini K product page (Chinese language only).

Awesome AU Plug! Nothing ever comes out with an AU plug first, wonder what the deal is? I’d snap up a few if they bring out an English App.

Very useful. Only if the socket would come for EU, I would buy a bunch of them!

For sure it is an ESP8266 with new markings on it. I haven’t figured out yet why the markings were changed. Konte may have paid for a custom boot ROM mask or something like that to keep people from cloning.

@Rob Hart
If it’s an Android app, don’t worry too much, someone ( even you ) can just use apktool to translate the strings. Of course you need google translator or something at first but they can be adjusted later.

@mariis thanks for the idea, I’ve downloaded the apk. The Permissions required are crazy! Never seen an app need so many Permissions.

Funny , I actually have a Xiaomi power strip which has an AU plug ( got an adapter for it since I live in the EU ) which I could use to plug into this… My only problem is that I haven’t really worked out what I can do with a smart socket, I simply can’t fine any use for it.

@Rob Hart
You must not have used many Chinese apps before :). At least that one did not have permissions “that may cost you money”.

I’ve asked GearBest if they could send me samples. We’ll see.

@Marius Cirsta
You could use one as an alarm clock. Turning on the lights when you want to wake up 🙂

It depends how smart your plug is. I’m using a PowerUSB power extension with my computer, it will normally automatically turn off my screens, when my computer is off or in suspend mode. This requires some power monitoring at least on the computer socket.
http://www.cnx-software.com/2013/01/06/powerusb-computer-controlled-power-strips-review/

@Jean-Luc Aufranc (CNXSoft)
The Wiwo S20 is not that bad but they should spend more efforts on their hardware than the glossy packaging.
With current firmware the S20 plug does not remember its state (on/off) when there is a power failure. The remote control from your Android phone is also not aware of the current state of the switch.

@Rob Hart
It could be worth a try. It has not been updated since March 2015, so it might only work with the older models, unless they’ve kept the same API / communication protocol.

@Rob Hart
You could at least use it as a source for some translations and just update the few one they added in the new version of the Chinese app. I’d say this is not more than a 1h job but I might be wrong.
Anyway I still can’t find anything I can use this for … thanks @Jean-Luc Aufranc (CNXSoft) for the idea but it’s not really something I want … who knows maybe in the future I’ll be able to think of something.

Note “the pins of Chinese plugs are 1 mm longer” – if they’ve just described this as AU for foreign markets, it might jut out a little.

@Rob Hart Note that it’s a Chinese+US plug with the ground between the live and neutral for the US socket… I very much doubt this would be legal to use outside of China due to the very dangerous design. Personally I wouldn’t touch these.

That should be the app in google play
https://play.google.com/store/apps/details?id=com.kankunit.smartplugcronus

Now just tell me how I can buy xaiomi mi ninebot mini scooter.

Maybe they are sold in your country under another brand name.

I would buy here if I thought there was any hope of them delivering at this price http://www.geekbuying.com/item/Xiaomi-Ninebot-Mini-Self-balancing-Scooter-700W-16km-h-22km-Long-Mileage-with-Smart-System-Beginner-Mode—White-356448.html

@deets
Ah OK… I saw that website the day of Xiaomi scooter announcement, so I wrongly assumed Xiaomi just took their design.

No one commented on the dodgy look of the relay – blackened on one corner ?
and the caps look like they are bulging slightly ?

Could be useful for controling outside christmas lights

Just bought a whole bunch of these things and they are RUBBISH. SO disappointed. The app is barely legible. Half is in (very badly written) English, the other half in Chinese. All instructions are in 100% Chinese. The devices are detectable on the network briefly, and then nothing. They time out, they drop out, they simply aren’t reachable – even when placed directly beside my wifi router. Only once have a managed to get one single lamp to switch on remotely… every other time has been an abject failure. Terrible unreliable garbage. Save your money.

Anyone manage to reverse engineer the protocol or reflash the software?

@David
Now you’re talking. That’s where I see the value, so I can integrate it into my existing Home Automation system, rather than use their app. Given the comments above re the non-standard wifi module it may be tricky.

Hi everyone. Can anyone give me a little help with this?
I’ve bought one of these and nobody can tell me how it must be configured. I don’t read chinese..
Do you need to connect your mobile device to same wifi network as new device? I asumme yes.
After you press green button you go to second screen. What information do you need to introduce in each of those both boxes?

Jose, Just downloaded English app. Push button on plug when you plug in power socket and hold for 2 seconds. Can then direct wifi on phone.

Very frustrating device.The app in play store: https://play.google.com/store/apps/details?id=com.kankunitus.smartplugcronus&hl=en . Beware : did not manage to configure the plug with my nexus7 2013 but works on lenovo 2010. After the plug stop blinking (meaning get ip adress in router wifi)…surprise. The plug is OFFLINE, even you are in local lan. Maybe the plug didn’t get access to manufacturer cloud, but strange not working in local lan. Wrote to [email protected] and was lucky to get this answer “Thanks for you support, the minik that we have no formal sold to the foreign countries, it only has the Chinese standard at present, and… Read more »

I have quite a few of these. Clearly not meant for Australia but no issue. Does not meet our socket regulation requiring insulation on live and ground. Length of pins has not effected me. They mostly work fine. They sometimes can be hard to initially connect to app/account. There is a full english app but I have no success getting a stable setup with it. Otherwise works greay short of the odd time they switch on unexpectantly. Not noticed any unexpected turn offs. Did have a couple of them not pick up on my network accessable time and defaulted to… Read more »

ikonke device connect to homekit , anybody have idea ?

Can somebody please tell me that they are having issues with these plugs. Mine were working fine then all of a sudden i cannot connect any of these to my app ….REALLY REALLY FRUSTRATING…..I have uninstalled …reinstalled the app..and cannot get anything to work ARRRRGHHH