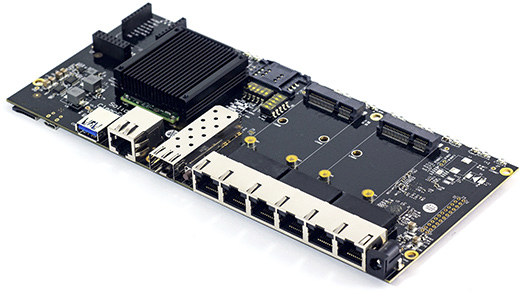 The company will also soon launch or lower-end version called ClearFog Base with the less ports, but with the same system-on-module as ClearFog Pro:

The boards support Linux 3.x distributions such as OpenWRT and one build with the Yocto Project. The block diagram also shows two SIM card slots not listed in the specs, and which should be on the top right of the processor. The routers board are comprised of a baseboard and the company’s microSOM-a1 based on Marvell ARMADA 380,  or microSOM-a2 with ARMADA 388 processor. The mikroBUS header allows you to use MikroElektronika Click add-on boards just like in HummingBoard-Gate board, and a module with audio and a SLIC would make the board suitable for VoIP applications too.

ClearFog Pro router board can be purchased right now for $170 without power supply, metallic enclosure or 8GB micro SD card, and if you want the full package you’ll need to spend $240, which includes $50 for the case itself. SolidRun did not say anything about price and availability for ClearFog Base board, except it’s coming soon. You can find further details, including documentation and schematics (PDF), on Solidrun’s ClearFog and ARMADA MicroSOM product pages.