If you own an Android or Android Wear smartwatch, but would like more control over its functionality or simply prefer a truly open source operating systems for your watch, AsteroidOS could be the answer. Like alternative mobile operating systems such as Sailfish OS or Ubuntu Touch, AsteroidOS leverages existing Android drivers via libhybris library, and the user interface relies on Qt5 and QML running on top of OpenEmbedded, while Bluetooth is handled by BlueZ 5 library. 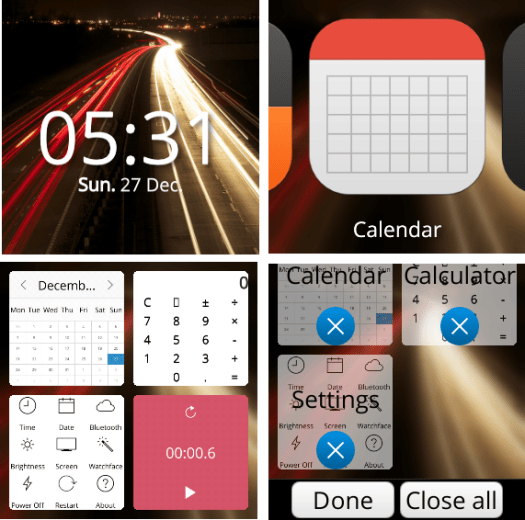 There’s no company behind the project, and it is purely community driven. Currently only the LG G watch is supported, and you can give AsteroidOS a try by following the instructions. The Wiki provides information about the boot process, how to build the OS, creating an Qt5/QML app. etc.. and also explains how to port AsteroidOS to other watches, so if the project gets traction more devices will be supported.

There are several ways to get involved with the project:

Beside Github, you can also contact the developer and community on #asteroid IRC channel.

You can find all details on Asteroidos.org, and the project leader will present AsteroidOS at FOSDEM 2016 at the end of the month.

If you are interested in open source project for smartwatches, you may also consider checking out the open Source sport/smart watch project that runs on the lower end Weloop Tommy, and may run on SMA-Q watch later. as well as Fernly a reverse-engineered operating systems for MediaTek MT626x wearables.

This might be nice if ported to the Blocks modular watch. Hopefully I’ll get my Blocks soon and we’ll see. Also that one has Adreno 305 so it might work with native Linux drivers, no Android crap needed.

I tried to find out where to buy an LG watch but couldn’t. I think you have to go to and android paystore but it wouldn’t let my ipad see it. I am guessing that they are expensive, compared to what you can buy on aliexpress. It makes me wonder how open android wear is when there are no cheap android smart watches that I have seen. I have a gv19 smartwatch but it needs bigger text for showing the time as I don’t wear my reading glasses all the time. If the watch could install 3rd party apps then… Read more »

@Nz1
Android Wear has higher hardware requirements than most cheap watches on the market.
LG G Watch is indeed hard to find. There are some refurbished ones for $99.99 on eBay: http://www.ebay.com/itm/LG-G-Watch-Black-W100-Android-Wear-Smartwatch-FRB-/171816938160
The cheapest Android Wear (TBC) watch I know is Bluboo Xwatch ($99 shipped), that should be available at the end of February.

You also need a license from Google to install it on your device. There’s some code on AOSP, but maybe it’s not enough to have a working device, just like Chinese manufacturers are doing on tablets, TV boxes and smartphones.