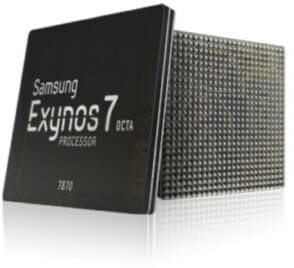 Usually the higher the model number, the faster the processor, but not with Samsung, as the company’s new Exynos 7870 processor will feature eight ARM Cortex A53 cores @ 1.6 GHz coupled with an ARM Mali-T830MP GPU. It will be manufactured with 14nm FINFET process which should reduce power consumption by 30% compared to 28nm process.

In the recent pas, low and mid-range SoC were usually manufacturer with 28nm process due to the high cost of 14nm process, but those costs must have come down dramatically, after Snapdragon 625 processor, Exynos 7870 processor follows suit by being manufactured using 14nm process technology.

I would love to see Blu make their next Blu Studio Energy with this chip, I can only dream at this point with this chip in a 5000 mAh battery.

This SoC makes me want to wait for new device instead buying Meizu Pro 5. Basically from smartphone i need few thinks.
1. Long battery life (Hot swap-able plus fast charging on external charger would be nice feature)
2. Lot of memory (At least 64 GB, At least 16 GB of it should be fast)
3. Sound quality as good as it can get at affordable price (Headphones are more important, but front facing speaker also would be nice)
4. Best navigation system
5. And decent horespower

All in all, the state of SoCs for android devices seems pretty dismal. The Snapdragon 820 is a step in the right direction, but their is still a long way to go on single-thread performance.