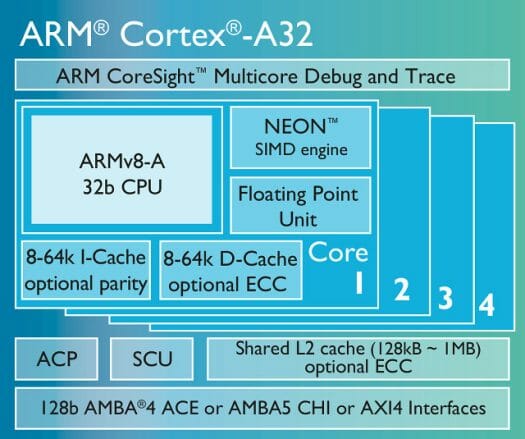 So they’ve got rid of AArch64 instruction set out of ARMv8 architecture in order to improve power efficiency, while keeping the 100 new instructions part of Aarch32 to improve performance, and keeping ARMv7-A compatibility.

ARM also claims the performance will be the same as Cortex A35, and close to Cortex A9, with gains in integer workload efficiency of respectively 10, 25, and 30% over  Cortex A35, Cortex A7, and Cortex A5. Thanks to the lack of 64-bit support, Cortex A32 is also 13% smaller than Cortex A35.

Cortex-A32 can also be used in configurations optimized for either performance and power consumption. At the top ends of the spectrum, a quad core Cortex A32 processor @ 1.0+ GHz with FPU + NEON + Crypto engine, and 2x 32KB cache would consume less than 75mW/core, while a single Cortex A32 processor @ 100 MHz 2x 8KB cache, and no extra options would consume less than 4 mW. Typically, SoCs based on Cortex-A32 should be manufactured with 28nm process.

More details can be found on ARM Cortex-A32 product page, and ARM community blog. You can also learn more by attending “The Future of ARM Cortex-A Processors for Embedded Compute” at Embedded World 2016 on February 24 at 10:30am.

Oh that’s right, ARMv8-A allows a processor to only be 32-bit. It’s getting difficult to remember all of the cores and what they do.