Finally all these ARM Cortex A17 marketing materials for Rockchip RK3288 were not some typos, but Rockchip marketing team may just have not received the memo reading “Confidential”, as ARM has now officially announced Cortex A17 processor based on ARMv7-A architecture, with support for big.LITTLE with Cortex A7, and that can be coupled with Mali-T720 mid-range GPU and Mali-V500 VPU. 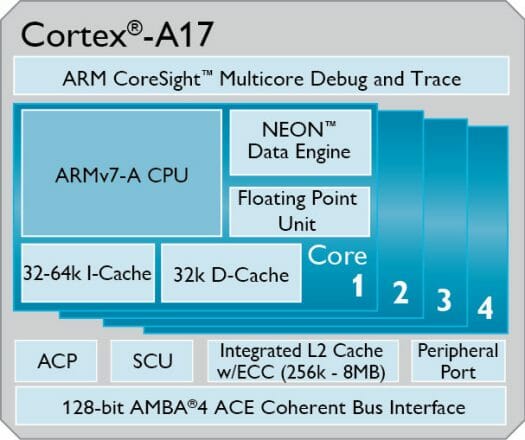 After Cortex A15, and Cortex A12, you may wonder “Why? But Why did ARM had to launch yet another new core?”. Here’s the company answer to that question:

The Cortex-A17 processor is scalable up to 4 cores, each offering a full out-of-order pipeline delivering peak performance of today’s premium performance levels. A fully integrated, low-latency L2 cache controller, accelerator interfaces to target specific use cases, and high-throughput AMBA 4 ACE Coherent Bus Interface enable the Cortex-A17 processor to be tailored for the right task. Its modern design is best complemented with the latest advanced IP like ARM Mali-T720 GPU, ARM Mali-DP500 DPU, and ARM Mali-V500 VPU and CoreLink CCI-400, but is also fully backwards compatible to existing AMBA3 and AMBA4 AXI based systems based on ARM Mali-450 GPU and CoreLink NIC-400 to ease integration and time-to-market.

The Cortex-A17 processor, in combination with its high-efficiency counterpart Cortex-A7 processor, provides an ideal solution for mobile devices in 2015 and beyond, bringing the heterogeneous processing benefits of big.LITTLE Global Task Switching (GTS) to the mid-range market. Coupled with CoreLink System IP components like the CoreLink CCI-400 interconnect, Cortex-A17 and Cortex-A7 processors are the foundation for upcoming devices that are more efficient and higher performance than any solution in this class before.

I’m not quite satisfied by that answer… No comparison with Cortex A12 or A15. I’m guessing they’ve probably made some power consumption improvements compared to Cortex A15 which dissipates a lot of heat. Looking at the different cores specifications on ARM website do not find meaningful differences. Nevertheless, Cortex A17 will be used in SoC used in mobile devices (smartphones and tablets), smart TVs, over-the-top devices, automotive infotainment, and other consumer oriented markets, and seems to be used as a Cortex A9 replacement.

The first SoC officially announced with Cortex A17 is Mediatek MT6595 (which somehow will become MTK6595 on many sites) an Octacore mobile SoC with 4x Cortex A17, 4x Cortex A7 in big.LITTLE configuration fully supporting Heterogeneous Multi-Processing (HMP) with Imagination PowerVR Series6 GPU, H.265 UHD decoding and encoding support, and an LTE modem. Mediatek MT6595 will be commercially available in H1 2014, with devices expected in H2 2014. The other SoC with Cortex A17 and probably Mali-720 GPU should be Rockchip RK3288, following the unintended leak at CES 2014…

You can find a bit more details on ARM Cortex A17 page.

@onebir
Four A17, Four A7, and the GPU will change too with PowerVR instead of Mali.

@Jean-Luc Aufranc (CNXSoft)
Oh no, not PowerVR again … it seems that for some reason companies like PowerVR. I would too but then I remember about their binary blobs they call drivers.
And yes, I’m sure the companies that make the SOC are to blame. Because I’m sure Intel insisted on not having Linux support and having a closed source binary blob.
Well at least Intel is starting to use their own GPU which has nice open source support in upstream Mesa so thank God for that.

I would like to know, if possible to have NDA with mediatek, if it ‘s easy? for a project, without start up for the moment?

@Marius Actually with Mediatek, I’m fine with PowerVR since they clearly don’t give a damn about Linux and compliance with open source licenses for their mobile application processors, so it does not matter which GPU they choose. The PowerVR GPUs have pretty good performance. That’s probably why we don’t see many type of device based on Mediatek SoCs: mainly smartphones and tablets, as well as some portable game consoles. They used to be a strong player in DVDs, but finally decided to more or less leave this market. However I can see they still sell DVD / Bluray ICs, and… Read more »

Anandtech has some more info about Cortex A17 – http://www.anandtech.com/show/7739/arm-cortex-a17

The first SoC should be available in 2015… So I’m really confused now, as I’ve read RK3288 will be available later this year.

@Jean-Luc Aufranc (CNXSoft)
you are wrong. RK is A12. do consult from S|A

@dr. Bormental
Semiaccurate wrote their article on the 4th of February, before Cortex A17 announcement. I think they are wrong.
To be 100% sure, we may need to wait for the actual hardware to play with.