The Lima driver, a project aimed at providing an open source driver for ARM Mali-400 and Mali-200 GPUs, was introduced 4 years ago, and after some reverse engineering work, a Quake 3 demo was showcase later in 2013 with an intermediate version of the Lima drivers. However, the main developer (libv) eventually lost interest or lacked time to further work, and the latest commit was made in June 9, 2013. But another developer (oklas) committed some code to limadriver-ng just a few days ago. 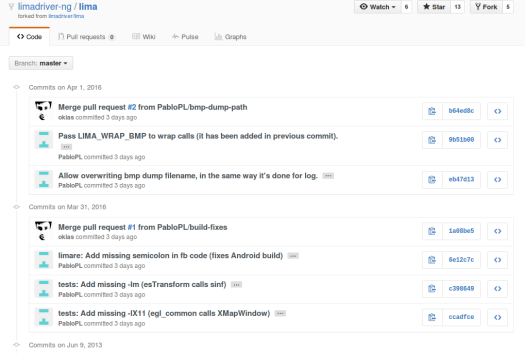 But don’t get too excited, as the modifications are minor with some build fixes, some other Makefile modifications, and only one C file modified with 6 new lines of code. But maybe that’s just the beginning… We’ll see.

Mali-400 GPU is now rather old, so why would somebody work on this? One explanation could be C.H.I.P and Pine A64 boards are both based on Allwinner SoCs with a Mali-400 GPU, but a more likely explanation is that libv invited new developers on limadriver.org:

So we’ll have to see how this all turns out, and if somebody is indeed motivated on working on the port. If so, C.H.I.P and Pine A64 boards, as well as other Mali-400 based platforms, could get open source GPU drivers.

Thanks to Luka via Reddit, where you can find some more details about the timeline.

If you look through the IRC logs, okias mentions Allwinner based boards several times as a motivation.

A decent Mali-400 driver would indeed help a lot for all boards with A20 like BananaPI.

Good work, but it’s about three years too late. The Mali-400 is so old now, even old apps on Google Play gave it up because the drivers were so buggy. Talk about turning a product into a Pariah.

Should be great to have a completely working mainline, open source cedarx and the lima driver working on these boards.
I still have approx. 4 allwinner A10/A20 devices, so it should be great to use them without any installation hassle.

Nice to see at least a little new chance for a oss mali driver. Libv with his behavior locked it too long time. The dtiver for Mali400 should ve usefull for Mali450 and 470 too and probably has some common base with new Mali series. Mali GPU is used on lot of SoCs not only AllWinner but also Samsung, Rockchip, Mediatek, Telechips, AMLogic, Wondermedia, ST-electronics, HiSilicon…