LoveRPi, a distributor and reseller of electronic boards and accessories, has run benchmarks from the Phoronix Suite on several low cost development boards:

* Banana Pi boards price includes shipping, while all other boards do not. The total price for each board may vary a lot for your country depending on shipping and local taxes. 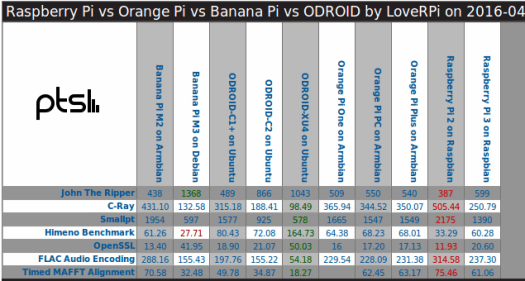 The 7 benchmarks John The Ripper (password cracker), C-Ray (raytracer), Smallpt (illumination renderer), Himeno Benchmark (solver of pressure Poisson), OpenSSL, FLAC audio encoding, and Timed MAFFT alignment are mostly stressing the CPU’s integer and floating-point unit either for single thread or multi-thread performance, so other parts such as storage should have very little impact on the scores.

The table shows the Cortex A15 based ODROID-XU4 is ahead in most benchmarks, and from a CPU performance perspective deserves its higher price, while the Raspberry Pi 2 is now clearly the slowest of the bench. 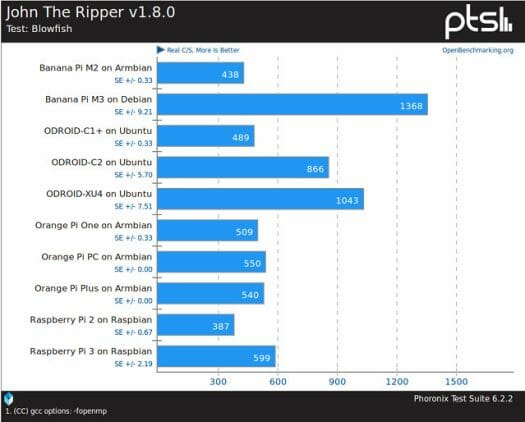 John The Ripper is the only test where ODROID-XU4 is outperformed, and the eight cores clocked at 2.0 GHz of Banana Pi M3 makes it the best boards of the lot, if you want to crack passwords with a cheap board. Interestingly Orange Pi boards performance is not that far of the one of Raspberry Pi 3. 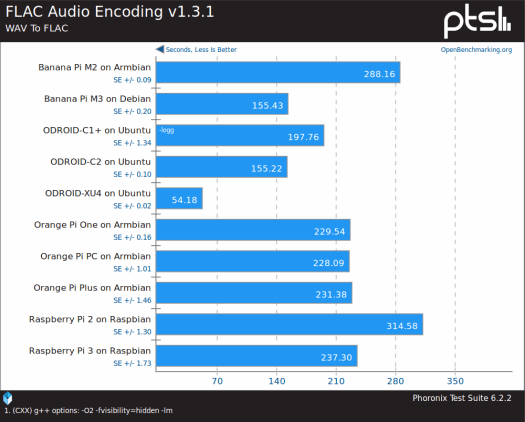 FLAC audio encoding must mostly relies on single thread performance as ODROID-XU4 is clearly ahead here. For this particular task a $10 Orange Pi One board will do just as well as a $35 Raspberry Pi 3.

Of course benchmarks are only one part of the story as you also need to consider the interfaces, system memory (e.g. there’s usually no difference between a system with 1GB RAM and one with 2GB RAM in benchmarks), and other requirements for your project or use case.

It should be noted that the tests with Banana Pi M3 were made with a SinoVoip OS image and not Armbian (we thought about suppporting the M3, I already made an image but we dropped the whole idea since it’s not worth the efforts). Due to the settings used the Banana Pi M3 doesn’t perform as it could (SinoVoip obviously has no clue how to increase the single threaded clockspeed to 2.2GHz so it remains at 1.8GHz, throttling settings are bad and negatively affect performance and so on). And all these numbers above are pretty useless when you want to… Read more »

For the first time I am reading Orange pi wins..

@Jean Dassi Fongang This is only a good reference when your use case is ‘running unoptimised code in unpredictable manner’ 24/7 on a device. In case you want to run ‘real tasks’ on the board many other things are way more important than ‘fire and forget benchmarks’ measuring irrelevant stuff. For example on Banana Pi M3 only one of the 2 USB host ports is used and the USB-to-SATA bridge on the board is probably the slowest in the world (15MB/s write speed max). When you run demanding stuff on this board without a heatsink due to the moronic throttling… Read more »

@tkaiser
A) “And all these numbers above are pretty useless when you want to know how the SBC in question behaves in real world situations or in specific use cases.” LOL

B) Any news of a 1GB, 2GB RPI Zero? Oh I forgot the RPI Zero soc cannot handle more than 512mb

C) Any news of RPI Android on the RPI Zero.

The above test should of included real world software non programming people use like Android, how is RPI at Android use?

@onebir I don’t think a One with 1GB will ever be available (why not choose the PC for $15 instead?). If it’s about small size you could also have a look at Banana Pi M2+ or NanoPi M1 (when available with 1GB). Both manufacturers chose to stay as compatible as possible to the Oranges so only minor tweaks are necessary to support them. BTW: I created a mainline kernel Armbian image an hour ago, running with kernel 4.6-rc1 on Orange Pi PC with ‘alpha’ Ethernet driver and get already ~95/85 MB/s (a few RX errors and timing issues are responsible… Read more »

These tests were done with reference OSes. Armbian for Banana Pi M2 and Orange Pi. SinoVOIP’s Debian image for the M3. Raspbian for Raspberry Pi. We did not use any special flags to set compiler optimizations so this is a good reflection of out of the box performance. If the Raspberry Pi Foundation elects to create a ARMv8 Raspbian, we will retest and we do expect better performance.

@tkaiser
its becos of you guys, the linux-sunxi community that prevent most of all-winner based product from becoming an Orange Pi Brick.
hahahahaha…..

i agree with that this is only a reference for bechmarking setting, which is unreliable in at best for real world usage.
need more test with diff sw.

You should run SLAMbench on the various boards. It is also a pretty interesting paper, since it boils down SLAM to frames per watt. They test some CUDA implementations, and show that nvidia hardware is way ahead of everyone.
I ran SLAMbench on a TX1 module and got 50fps!

I thought Amlogic S805 is Cortex A5 not A7 as mentioned in the top list….

@olin
and you thought correctly… 🙂

The text mentions at several places ODROID-XU7 but the tables etc mention XU4 and no mention of XU7. Typo?

@FransM
Fat finger issue. I could only find the error in one place though. Corrected.

@Andrew P
Very interesting paper indeed 🙂 but getting back to the subject : Low cost development board, we cannot consider the Nvidia TX1 as being in this category (and price range !!)

rpi wins for a desktop for a kid ?

@milkboy
This ( http://goo.gl/7qAjtr ) Orange Pi-PC is refusing to be bricked !

The tests are useful to a tinkerer with 24/7 headless needs.

Costs aren’t reflective of a PC style device, though, nor are the tests. Need a case, Power, HDMI cable, ethernet cable unless connecting wireless. And this says nothing about ability to give a good experience. Hardware acceleration of video as well as OpenGL depend on hardware, drivers, and OS. But tests generally only focus on the hardware capabilities. It’s worthless without reliable, efficient drivers.

think it also goes on odroid-xu4