PIR sensors are used to detect motion for example to turn on or off a light bulb when motion is detection. One such sensor is HC-SR501 motion detector, which costs around $1, and is tiny (32 x 24 mm), but not quite thin due to the design that needs to capture infrared light, with an height of around 2 centimeters. If you’d like something almost as cheap, just as small, but much thinner, microwave radar modules could be a good alternative.

XYC-WB-DC is one of those modules with the following specs:

Potential advantages over PIR sensors include wider detection angle, and lower power consumption, HC-SR501 datasheet reports respectively 120 degrees detection, and 65 mA “power consumption” @ 5V. The range is about the same for both PIR and Microwave radar modules, but the microwave module will also work through walls (which may be an advantage or an inconvenient), and the signal can be blocked by metal.

The module will output high signal (3.3V) when motion is detected, and the detection delay can be adjusted from 1 second to hundreds of second (two minutes max) by adjusting R6 resistor on the board as explained on this Taobao page (Chinese). By default there’s no resistor and the delay is 30 seconds, and you can adjust the delay by using 1K to 250K resistor. 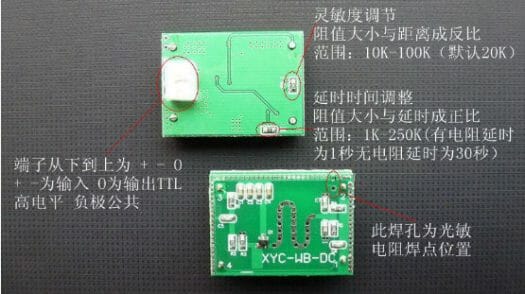 I’m not sure what the other resistor (10K – 100K) is used for (maybe max distance), which brings me to the downside that there’s absolutely no info in English. However, I found this module on Pete Scargill blog, who tried it, and could confirm motion is properly detected.

XYC-WB-DC microwave radar can be purchased for about $2 to $2.5 on Aliexpress, eBay, ICSstation, etc…

What happens if you take the dome off a PIR sensor? (Maybe they just become much more directional?)

I hope that the bats do not cause any problems. Useful little creatures. In the evenings, diligently collected insects.

No dome on PIR makes them more directional. The dome is a multifaceted lens.

@Jon Smirl
That’s the inherent problem of RF based solutions: if you use open band then ether it will be used, or is already used, by something else.

@Jon Smirl This is a common misconception. Taking the dome off makes the PIR useless. http://www.glolab.com/pirparts/infrared.html Basically, the sensor in a PIR detects long wave IR, which is emitted by human beings, and everything else, including the detector and the sensor. As a result the signal from an uncovered detector is very weakly varying. The clever trick that makes the PIR work is that the array of Fresnel lenses modulates a hot spot as it moves across the field of view and an analog circuit picks up this modulation. As a result the PIR only detects the motion of a… Read more »

Is there anything like this that outputs more data from the sensor than just a binary ‘movement: yes/no’ signal?

Translating the specs to English should be a non-issue. Surely, there is a geeksite that does this?

The other resistor is for sensitivity adjustment.
It is 20K by default and sensitivity decreases as resistor value goes up. Resistor range is 10K to 100K.

@Jesu
Bats use soundwaves, we are talking radiowaves here.

@Joe Desbonnet
The HC-SR501 datasheet linked in the post reads:

Just tested one of these devices. 5V 1.11mA (both measured as current, as well as voltage over a resistor). Current drops to 1.09mA when nothing is detected. Even then, PIR is much more energy efficient. When R6 is removed, ON time after detection is about 10s. R9_1 SMD marking is 123, R6 marking is 222.
As PIR compares the two or four quadrants of its sensitive area, the lens is essential. No lens, no relative change, no detection.

I just got a XYC-WB-D1 ( http://cgi.ebay.com/ws/eBayISAPI.dll?ViewItemVersion&item=112040243727 ) and connected vcc to Raspberry Pi pin +5V (phys 2) and gnd to gnd (phys 6) and out to GPIO4 (phys 7) – I’ve used the same hookup to read PIR sensors frequently – but the radar sensor always returns ‘1’ when reading the pin regardless of whether there is motion or not. Any ideas why?

@Graham Toal Two potential issues based on: The module will output high signal (3.3V) when motion is detected, and the detection delay can be adjusted from 1 second to hundreds of second (two minutes max) by adjusting R6 resistor on the board as explained on this Taobao page (Chinese). By default there’s no resistor and the delay is 30 seconds, and you can adjust the delay by using 1K to 250K resistor. 1. You may have to convert the 3.3V to 5V for Raspberry Pi. Connect an oscilloscope, or a multimeter to check the voltage 2. Delay which can be… Read more »

any fix to your issue? email me at [email protected] if you did or didnt

Is this radar module can also be used in vital sign detection (heart beat/respiration/living being which is not moving)?
What kind of radar architecture used over here? (CW doppler/FMCW/Pulsed)?