Arduino LLC has launched a new official Arduino board with MKR1000 board under the Arduino brand in the US, and Genuino brand in the rest of the world. The tiny board features Atmel ATSAMW25 SmartConnect module comprised of Atmel SAMD21 ARM Cortex-M0+ MCU, WINC1500 2.4GHz 802.11 b/g/n Wi-Fi chip, and ECC508 CryptoAuthentication device. 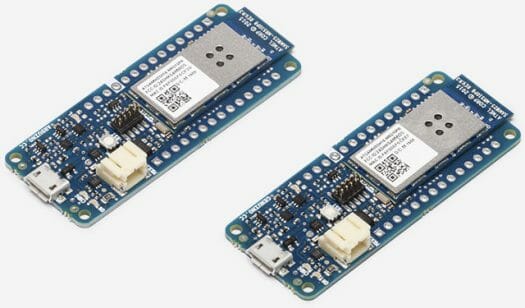 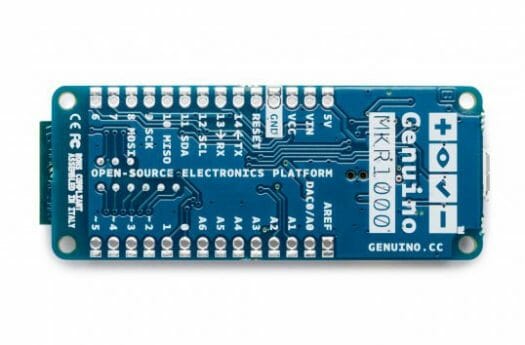 The board is programmable with the Arduino IDE, as with all other Arduino boards, however, you must be aware that I/Os only support 3.3V (not 5V like most Arduino board), and VIN only support 5V, and not a voltage range as on Arduino UNO for example. You can find more documentation including the hardware designs files on Arduino / Genuino MKR1000 product page, and the Getting Started Guide.

3x times too expensive. Give us a clone !

@Ian Tester
thanks, looks like the feather boards are better in every way…

btw: don’t forget the sodaq autonomo, which adds solar charging (without which the lipo battery is of limited value)

Maybe thats why the Arduino guys came up with that $35 price tag then.

@Singman
if you can get by with fewer gpio’s, the Feather HUZZAH with ESP8266 is half the price
but really, if you want cheap, order some arduino nano/micro + solar charging boards from china for ~$1 apiece…

Another 3.3 “super” microcontroller development board is the WeMos D1 (R2) WiFi Board. Have not tried the R2 version, but the “R1” version works “easy-peasy” to borrow an expression from my daughter. The WiFi is based on the ESP8266 and there is an ESP8266 Core you can use to get it up relatively painlessly from GitHub. In China, they sell for 35RMB or about $6.00 US. Dirt cheap. Hope the company is making enough money to be around a while. Have two boards. The first one I played with to get familiar with the board by breadboarding it to a… Read more »

@Wm Moore
WeMos has done a good job with their boards. I especially linke D1 mini and shields, which I tried @ http://www.cnx-software.com/2016/03/22/getting-started-with-wemos-d1-mini-esp8266-board-dht-relay-shields/

MKR1000 MCU is clocked at 48 MHz. The Arduino board main advantage is probably the multiple ADC inputs, and one DAC output. Power consumption might be better too (TBC).

Looks like a copy of the feather boards from adafruit, but differing pins. It has a slightly different AVR ARM processor than the feather m0 ( and the arduino zero) but very similar specs. I am not sure yet of any advantages with the new arduino, however adafruit sells the Adafruit Feather M0 WiFi – ATSAMD21 + ATWINC1500 for slightly less, with many shields and accessories, as well as other processors in the same form factor. Some times integrated is not better, for the wifi, if the integrated cpu needs to divide its resources between the networking tasks and everyhthing… Read more »