MK808B Pro TV stick is the successor of the popular MK808B Plus and before that MK808B Android TV dongles with an upgrade to Amlogic S905 processor with 4K support. GeekBuying sent me a sample for evaluation, so I’ll start by checking the hardware before testing the device thoroughly in the full review.

I received the stick in a package larger than I expected, but apparently about the same as the previous models (which I had not reviewed).

But that’s because of the included accessories: a 5V/2A power supply, a USB cable, a mini USB OTG adapter, a mini HDMI to HDMI cable, and a user’s manual.

Apart from the markings “MK808B PRO” and “4K Ultra HD”, the device looks the same as the older models.

A mini USB port for power, and a USB 2.0 host port can be found on one end, with a micro SD slot on the side. 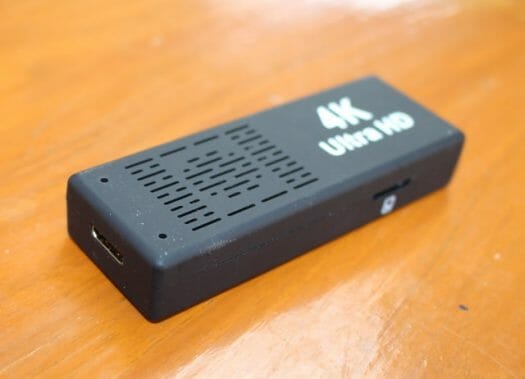 A mini HDMI port on the other end, and a mini USB OTG port (hence the provided USB OTG adapter) on the other side. There are also ventilation holes on both sides of the device.

I used my favorite green plastic tool to separate the two parts of the case by starting right above the opening on top of the micro SD slot. 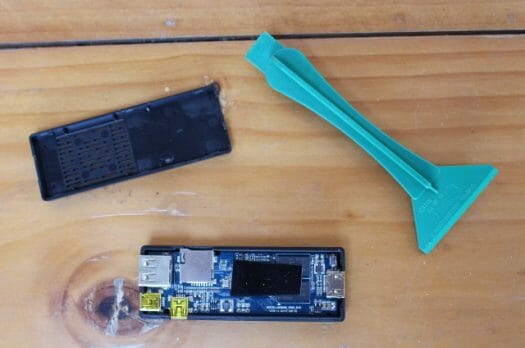 The first remark is that there’s very little in the way of cooling with a think and hard black sheet covering the processor and partially two RAM chips. So that probably means the stick will run slower than most TV boxes based on Amlogic S905, as they may need to limit the processor frequency to keep it cool.

If we take it out, we can indeed see Amlogic S905 processor and two PE029-125 F1606 RAM chips (1GB in total) with some “S” logo. [Update: the company is SpecTek, a a wholly owned division of Micron Technology].  The board name is MK808B_S905_D16. You may also have noticed the push button on the top right corner of the board that is most likely used to enter recovery mode in order to update the firmware, and accessible via a hole on the top of the case.

The other side of the board features a 8GB SKhynix flash and a wireless module based on Realtek RTL8723BS for Wifi 802.11 b/g/n and Bluetooth 4.0 connectivity.

GeekBuying kindly sent the review sample, and if you’d like to order one, you could consider purchasing it from their shop for $34.99 including shipping. The stick is also listed on Aliexpress for $36 and up, and eBay for $39.99.

original MK808b Plus Ap6210/Ap6212, if not mistaken manufactured be netxeon,
has better cooling.

Will you do benchmark, test and comparison for this device? Thank you.

@SpicySaturdayBoy
Yes, I’ll do a mini review in a few weeks.

hi folk’s,
are there some custom rom’s availibe? or can all rom’s from s905 devices be used? thx, stefan

@stefan
It’s quite new, so there may not be any yet.
The place to go for custom firmware is Freaktab.

Just an FYI, the USB power cable (Type-A to mini-B(5 pin)) on mine was bad, the machine wouldn’t start up until I’d swapped it out for a different one.

On the back of the package you got it says it’s an S905 1.5Ghz and quad core GPU, but on Geekbuying this device is described as 2.0Ghz and Penta core GPU. What gives?? I’m after ordering a few on the bases of them being 2ghz as the old model was 1.5 🙁

@Lorenzo Caira
I have not started it yet, but it’s possible they lowered the CPU frequency for better cooling in such small form factor.
The old model was Cortex A5 @ 1.5 GHz, that one is Cortex A53 @ 1.5 or 2.0 GHz, so in any cases there would still be some improvements.

Mine (from Geekbuying) is running at 2.01Ghz, however its getting too hot and freezing after every approx 30min while using Kodi.

This temp app shows it getting up to 100c then stops working.
https://play.google.com/store/apps/details?id=com.yanyan.cputemp&hl=en