I’ve recently learned that the battle between the two Arduino teams, namely Arduino SRL (arduino.org) in Italy, and Arduino LLC (arduino.cc) in the US, had taken another turn with Arduino LLC now branding their boards as Arduino in the US, and Genuino in the rest of the world. This may certainly bring confusion to new comers, especially as they have to deal with different version of the Arduino IDE. With that backdrop, Arduino LLC has now introduced Arduino 101 (aka Genuino 101) board powered by Intel Curie module with Quark SE x86 SoC with Bluetooth LE and a 6-axis combo sensor. 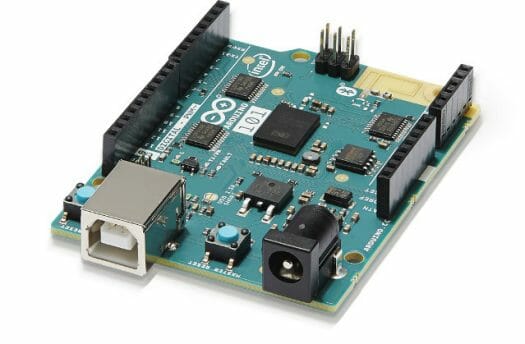 The Quark core runs ViperOS RTOS designed by Wind River, and handles the more demanding tasks, while the “Arduino Core” (ARC) takes care of I/Os. The Arduino core is only mentioned on Arduino website, but not Intel’s, so it might be that the DSP sensor hub is called ARC by Arduino.

The development board will also be used as a learning board in the US:

The Arduino 101 board, powered by the Intel Curie module, is incorporated as part of the Creative Technologies in the Classroom (CTC) physical computing courseware, developed and tested by Arduino to provide elementary and secondary school educators with the tools, support, and confidence needed to introduce their students to the foundations of programming, electronics, and mechanics

Arduino 101 should become available in Q1 2016 for around $30. More information should eventually show up on Arduino 101 pages on Arduino.cc and Intel.com.

Whoever wins, we loose.