A few weeks ago, one person asked me if Project Ara, Google ATAP project aimed to design a modular phone was still going on. I did not know, but it surely did not seem good with the official website showing a black page at the time, many developers claiming they’ve yet to receive the development kit, a lack of communication, and Google ATAP latest tweet was dated December 2015. That’s until Google I/O, where a project update was given during the event, and the developer kit will be provided in Q4 2016, while a consumer version will be for sale in 2017. That’s the plan at least.

If you have 10 minutes, you may want to watch the part of Google I/O 2016 video about Project Ara on YouTube.

They’ve also re-explained how it works with UniPro high-speed interface technology, and Greybus protocol to handle the communication with modules (up to 11.9 Gbps) including hot-swapping, as well as specially designed baseplates, connectors and latches. 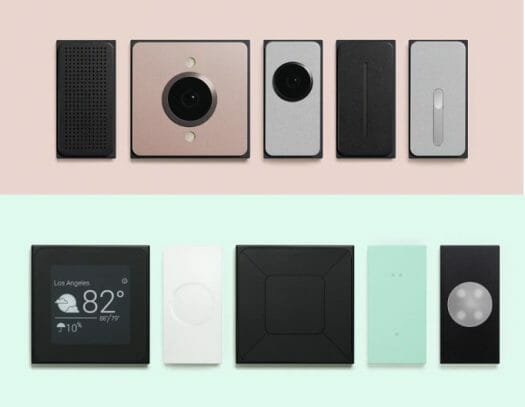 The other good news is that they collaborate with other companies such as Samsung, Micron, Toshiba, Panasonic, and others to develop modules with speakers, high resolution cameras, extra storage, secondary display, sensors, and so on. They also plan to work on a glucose meter module for people suffering from diabetes. Google also wants to extend modularity to tablets, and other computing platform, so Project Ara is not just for smartphone.

However, since the Ara frame “contains all the functionality of a smartphone”, the processor, memory (RAM), and main display are part of the body, and can’t be updated by module, so they have to scaled down the ambitions of the project when it was first announced.

If you’re a developer and would like to design a module, or develop software for Ara scroll down to the bottom of Project Ara website to leave your details.

apparently you can swap the battery too, but you have to do it quick.

LG with their G5 and G6 might get there faster!

@Bogolisk
I can’t find anything about a swappable battery, although I guess if you have an extra battery module this should be possible. Feel free to post a link if you remember where you saw that.

@Bogolisk
Thanks. That probably means there must be a small battery in the frame + a battery module.

The battery on this prototype is hot swappable, too. Yup! Camargo opened up the bottom, pulled out the battery, and there was enough juice in the frame to just keep the phone running. It probably wouldn’t last very long, but definitely long enough to put in a fresh battery, all without rebooting.

Has anyone saw if there internal storage on the main board? size?
There must be something that the platform can boot from…

Finally Project Ara is dead, or at least suspended -> http://www.reuters.com/article/us-google-smartphone-idUSKCN11806C