Amlogic S905X processor adds a few features over Amlogic S905 such as 4K VP9 hardware video decoding and HDR support, but thanks to better integration including built-in 10/100M PHY and audio codec, as well as support for 2-layer PCB, products with the new processor could potentially also be slightly cheaper, all other hardware specs being equal. We can now get a first idea of the price as one company has listed HiPo S905X TV box for pre-order on Aliexpress for $39.99 with 1GB RAM/8GB flash (Type 1), and $49.99 with 2GB RAM/16GB flash (Type 2). 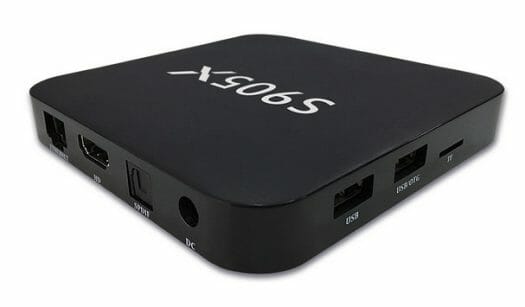 The specifications are preliminary, because it’s obvious that the company copied and pasted data from Z68 TV box with Rockchip RK3368 processor. I’m especially skeptical about Gigabit Ethernet, since S905X supports 10/100M without external components (except the transformer), while Gigabit Ethernet requires an extra Gigabit Ethernet transceiver. The device will run Android 6.0 and ship with one IR Remote control, one HDMI cable, a power adapter, and a user’s manual.

There’s no rush to purchase though, as HiPo S905X will only ship on June 20, and I’m sure other Amlogic S905X TV boxes will soon be listed on Aliexpress. Price should also go down a little, as Amlogic S905 based devices with 1GB RAM, 8GB flash, WiFi and Fast Ethernet now sell for about $32.

I own a mbox minim8s s905 2GB ram and 8GB ROM now I know the above box has extra features and a s905x but compared to UK eBay prices it seems over priced unless you really need the extra features.

I own a s905 device as well (MiniMX, 2/16G) and I’m quite happy with it, thanx to Alex his OpenELEC builds.
I would only consider an upgrade if the CPU is a real upgrade (S912) and if Open/LibreELEC is available.

I am waiting for NEXBOX and Xiaomi to release their variants before I buy one. Xiaomi have the obvious advantage being Android TV approved running Netflix and such flawlessly, and finally the boxes support VP9! I would also say that soon we will see S912 with the octa-core ARM setup and maybe USB 3.0 come out next quarter, don’t know much about big.LITTLE and such, but they both should have the same graphical capabilities nonetheless. The OTT makers will instantly pick-up that chip too. S912 might be good for software decodes? Smoother GUI? I thought that was Mali’s purpose though.… Read more »

@Rambler44
why does one need an “Android TV approved” to run netflix flawlessly? is there some additional hardware piece missing (like apple’s mifi ic) from other andoid boxes? With root access it should be possible to emulate that…

@bernstein I think Netflix is approving only certain boxes to run their content due to DRM protection. I am personally against DRM protection as it’s worse for us consumers and we have to pay the daughter company of Intel the DRM technology and licenses every appliance use. Like the HDMI royalty fee standard is just bullshit I much prefer to use a DisplayPort but I have no choice! But if they don’t need it then my bad. I would take it just because Android TV is so much better for a TV box you gotta try it to see the… Read more »