Project Tango is a project launched in 2014 by Google ATAP that aims at creating 3D map of your environment using 3D motion tracking with depth sensing for tracking your movements in 3D, precise and quick measurements, augmented reality and more. The first Project Tango development kit was a tablet based on Nvidia TegraK1, but Google recently announced that Lenovo planned to launch the first consumer smartphone with the technology.

Beside the announcement that there are going to make a phone, the company did not provide many other details so far, but it should feature a screen smaller than 6.5″ and cost less than $500. The main reason Google posted about this before CES 2016 was probably to reach out to developers who can submit the app idea to be features on the first Tango phone by February 16, 2015 with the following materials: 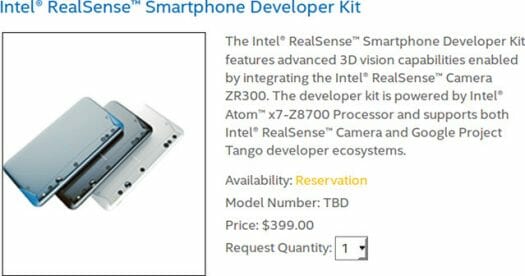 The smartphone will run  a recent version of Android operating system.

The development kit can be reserved now with a credit card (United States only), and will be billed for $399 once the kit is ready to ship. When that is Intel does not say.