Qintaix Q912 was one of the first Amlogic S912 TV boxes featured on CNX Software, and now the company, Qintex Tech, has sent me a sample of their device for review. I’ll start by posting photos of the device, and looking inside to find more about the hardware and thermal design today, before reporting my experience in the second part of the review in a few weeks.

I first thought they had sent me a chocolate box instead, but that’s refreshing to see a different retail package device. 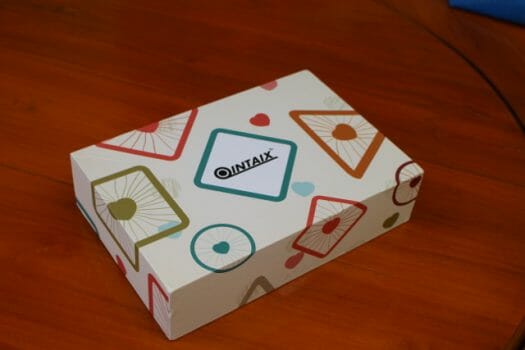 The bottom of the package shows the specifications in details, and I got the version with 2GB RAM and 16GB flash.

The TV box is a little larger than the other models I reviewed recently, but the external design feels of good quality partially because of the metal case, and front panel display.

The display include 4 digits for the time, as well as logo for Bluetooth, WiFi, Ethernet, as well as AV, HDMI, and S/PDIF. Other items on the front panel include a hole with a micrphone logo (but we’ll see there’s nothing there later), an IR receiver windows, a power LED, and the power button. One of the sides feature a micro SD slot and recovery button, while the rear panel includes two WiFi antennas, the DC jack, a Gigabit Ethernet port, HDMI 2.0 and AV outputs, optical S/PDIF, and three vertical USB ports.

The bottom of the case has plenty of ventilation holes, but no screws or rubber pads, so that’s not where we’ll start the teardown. The MAC address prefix 78:C2:C0 looks up to “IEEE REGISTRATION AUTHORITY”, probably meaning it’s not registered, except for one site claiming it belong to SES, a French company specializing in …. road signs. 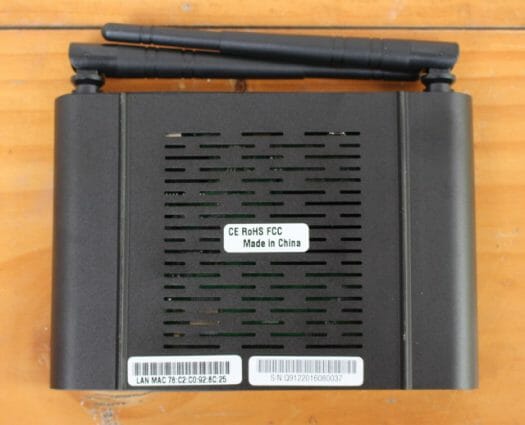 In order to open the device, we need to loosen the two screws on the outer side of the WiFi antennas. 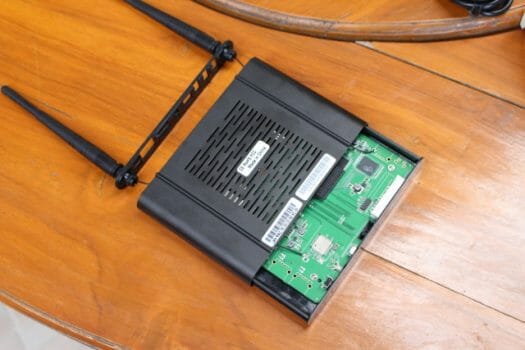 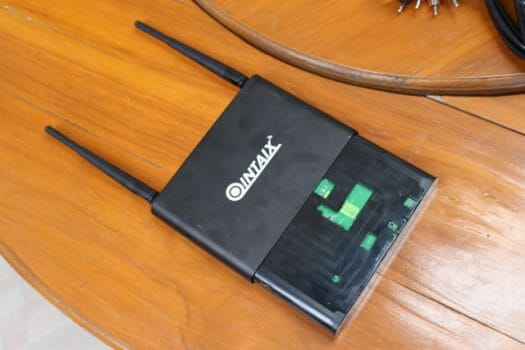 The design does not allow me to completely take out the board without unsoldering the WiFi antennas, something I’m not willing to do before the review. But we can still get a clear look of the hardware. First this model has a thin heatsink on the top of Amlogic S912 SoC, partially covering RAM chips too. The metal case does not seem to have been leverage for cooling at all. 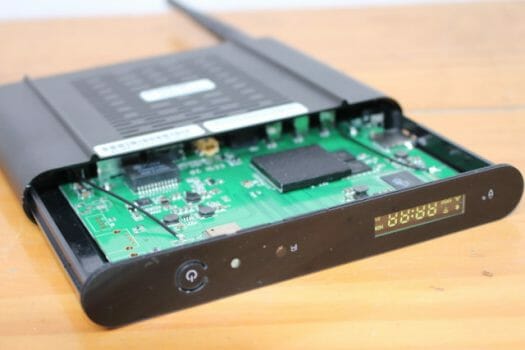 The top of the board features  a 16GB Toshiba THGBM5G7A2JBAIR eMMC flash, and two SKhynix H5TQ4G63AFR DDR3 chips, which two more that should be found on the other side of the PCB to get the full 2GB RAM. Connectivity is achieved via Ampak AP6330 module for dual band WiFi and Bluetooth 4.0, as well as H5007NL magnetic transformer, and Realtek RTL8211F transceiver for Gigabit Ethernet.

The WiFi antenna connection on the left side of the picture seem right, but the one of the right side feels a little odd, as if it was just for show… I just don’t know for sure since I can’t check the other side of the board. You’ll find the serial console (UART) pins on the middle left of the board. The board is named SZ-S29-V1.

[Update: the company sent a picture of the other side of the board, and confirmed the solder point for one of the antennas was “just a decoration”]

I’d like to thank Qintex Tech for sending Q912 mini PC for review, and resellers or distributors can contact the company to purchase in quantities or other inquiries. Individuals can buy the device on Aliexpress for $96 and up, or Amazon US for $122.

A bit expensive compared to other ARM A53 1.5Ghz devices.
And it also doesn’t look like the company has a history of releasing firmware updates which is a pity.

@mo123
As you mention, why the high price, is there anything that sets it apart for middle price products, say Sixty dollars?

The company sent me a photo of the back of the board, and it’s clear one of the antennas is just to make the box prettier, and has no practical use.

cnxsoft :
The company sent me a photo of the back of the board, and it’s clear one of the antennas is just to make the box prettier, and has no practical use.

Well isn’t that great….reminds me of some of the Pipo X Boxes/Tablets where there are holes for speakers on both sides but only one speaker is build in. WTF.

It’s not limited to Qintaix Q912. as all Amlogic S9xx processors are limited to 1.5 GHz. Some modifications to BL30.bin file may bring the maximum frequency to 1.65 GHz. You could ask Amlogic to help you with that for your box.

@Qintaix Susan
I’ve tried to update from Online OTA update today, but the server has not been setup.
I had to download and extract the firmware, and updated the firmware via a USB flash drive.
It worked, and kept my settings and apps untouched (as it should be).

@Jean-Luc Aufranc (CNXSoft)
It’s just latest firmware, not Online OTA update.. So yes it requires you to download and extract, then update through a USB flash drive. Great it worked.

Online OTA update will be available on Qintaix Q912 soon, not now.