Most people probably don’t know Shenzhen Shiningworth Technology, but if you’ve ever bought a low cost Android TV box, it may have been made by them. Companies such as Eny Technology, Acemax, Shenzhen Tomato and other are relying on Shenzhen Shiningworth for some of their products, including the popular MXQ series (although other companies are also using MXQ “brand”), and in the past I often found their MAC address in products I reviewed. But this time, the company decided to send their latest product for review directly with MXQ Pro G9CX. I’ll write a two part review starting with specs and pictures, before testing the firmware and providing the second part of the review in a few weeks.

Let’s start with the technical specifications:

The package shows the name MXQ Pro with some logos showing 64-bit processor, HDR10 and 4K support. There’s nothing that’s trademarked, so I would not expect problem with customs. 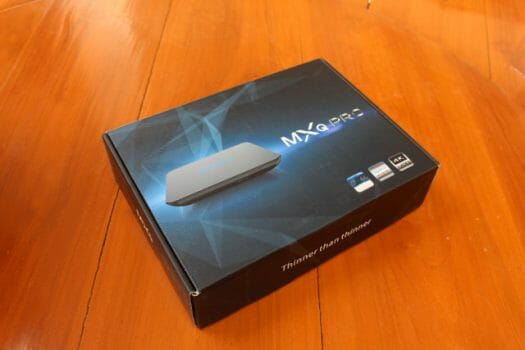 The device ships with an HDMI cable, an IR remote control taking two AAA battery, a 5V/2A power supply, and a user’s manual in English

The company also provides a separate wireless gamepad with an RF dongle and USB cable in a separate white box. 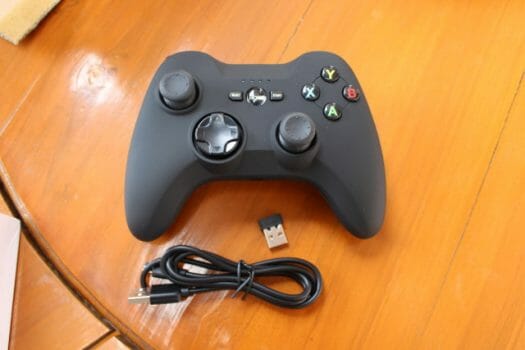 When I looked at the device itself, it felt very familiar, as the case is exactly the same as the one used for Acemax G9C, and which I later reviewed as Tomato G9C…

The front of the device as two LEDs and the IR receiver windows, one side include the microSD slot, and two USB 2.0 ports, while the rear panel features AV and HDMI video outputs, Ethernet, optical S/PDIF and the power jack. You may have noticed that the top cover is slightly lifted, but please ignore this, because I had to retake the side pictures after the teardown, as they were too dark the first time…

The method to open the device is exactly the same as for G9C TV box, there aren’t any screws, and you just need to gently lift the top cover, and remove some of the glue with a thin tool.

At this point you just have the large “LED” to lit up the MXQ sign. We’ll need to loosen four screws to access the main board.

Cooling is achieved with a thick metal place, and a black thermal pad covering the processor, which I’ve teared up to get a better view at Amlogic S905X processor.

Finally I had to loosen three more screws to check out the back of the board, but there’s not much there.

That’s all for the first part of the review. If you are interested in purchasing this product or a slightly modified version (different RAM/storage…) in quantities, you can contact Shenzhen Shiningworth through their website (warning: annoying chat pop-up showing up for each page load). MXQ Pro G9CX does not appear to be for sale at the retail level just yet.

Gear best are flogging a TX3 Pro brand that’s has soom spec howlers/errors in the description, one minute it is a A53 the next described as a quads A5 !

@theguyuk
A review of the TX5 Pro model is coming to CNX software in a few weeks.

Could you also please test limelight/moonlight streaming to check what latency you get?

The S905X CPU should be up to 1.5Ghz, not up to 2.0Ghz as in the description. The S905X CPU is a budget version of the S905 with a lower clock rate. So many S905X manufacturers advertise their tv boxes with the incorrect CPU information and just use the same description as in their S905 tv boxes, maybe they don’t want users to know it’s slower? With the TX tv boxes there are big advertisements on Geekbuying and other sites saying up to 2.0Ghz but if you look in the detail of the description it only says up to 1.5Ghz. So… Read more »

Now Beelink has promoted Beelink GT1 with Amlogic s912,
they having a campaign for product review, you can go to their forum for detail.
http://bee-link.com/forum.php?mod=viewthread&tid=274#lastpost

@Doug
There’s a user’s manual included in the box, but obviously it’s not very useful.
If you’ve ever used an Android smartphone, system configuration is quite similar.

How do I get rid of the viewing full screen to exit, swipe down from the top? I watched videos on YouTube but they were different from this drop box the other ones said ok you clicked on that and it went away, Mine says “got it” I click on it but nothing happens. Any help you be appreciated it’s the 6.0.1 version

@Mike
I have not used the latest firmware for that box, but normally I just click with an air mouse or a USB mouse on the button that says “OK” or “Got It”, and it goes away. If it does not work, then maybe you may try the smartphone app: https://play.google.com/store/apps/details?id=com.rcclient.RemoteIME&hl=en, and enable the “Remote” in settings.

Hello, thanks for the review.Any idea where I could get the latest official firmware or at least a compatible one?

Dear sir.
I lost all the data on my MXQ PRO(G9CX).
HOW I CAN GET THE WAY OF RECOVERY.
THANK YOU

@Refaat
Unless you’ve made a backup, I’m not aware of any recovery method.
You’ll have to reinstall and reconfigure your box manually.

Does anyone know how to stop this auto turning off? Trying to put a static website (of sports fixtures etc..) through Google Chrome but it auto turns off after 30 minutes.

@Sam
Not sure about the specific item in that firmware, but usually there should be an option about Sleep or Screensaver in the display settings.

Hello ….I have a mxq pro model G9CX and I’ve been trying to update to the new kodi krypton and it fails .ive tried through a usb stick and also through the android box and it failed .
Is it a 32 but or 64bit …thanks in advance

I have one of these and its a slow as a horse, it will not even run one app in the background, I have tried resetting it and removing the apps I installed and it still slow. It the worst MXQ TV box you can get, its rubbish, more like it can only run properly Android 4.4 cause of its 1 GB ram and it rubbish CPU, it has the same specs as the old MXQ box with Android 4,4 on it, that has S805 and 1 GB ram, you need 2GB ram to run to Android 6.0.1 or to… Read more »