Coowell V4 Android TV box is based on Rockchip RK3368 octa-core processor with 2GB RAM, and 16GB flash, and also includes a camera. In part 1 of Coowell V4 review, I have already taken photos of the device, and torn down the device to have a closer look at the board, and the camera which is based on a GC2145 2MP image sensor. Today, I’ll mostly test the camera and microphone, including firmware compatibility with Skype, Google Hangouts, and the latest Duo by Google app. Finally, it’s been a while since I’ve tested a RK3368 TV box, so I’ll run CPU-Z and Antutu again.

Coowell V4 hardware setup is pretty usual, and I connect an Ethernet port, and the USB RF dongle for MINIX NEO A2 Lite air mouse, as well as a USB keyboard to take screenshots. However, while normally I’d use my own HDMI cable, I had to use the provided cable since the device features a mini HDMI port. 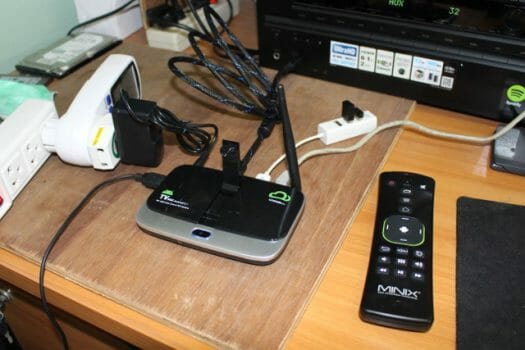 Once you connect the power the power button LED on the unit turns red, and you need to press the button to boot it up, with the LED switching to blue color. A typical boot takes about 30 seconds. If you don’t use the camera, you can fold it down when you don’t use it if you have privacy concerns.

The launcher is optimized for TV use, and the user interface has a 1920×1080 resolution. It includes shortcuts to other “folders” like Online Video, My recommend, My Apps, Music, or Local, and a shortcut to Settings. It also features a customatizable row of shortcut right under the main buttons. The status bar is there. but can also be hidden. I went to the settings to check video output was set to 4K 60Hz, and it was the case.

But let’s get to the main selling point of the TV box: its camera. I’ll start with the camera app.

Most people who probably such TV box for video conference purpose, so I’ve tried what I consider the most popular video conference apps in Android: Skype, Google Hangouts, and the latest Duo by Google. I’ll describe my experience first, but you can also jump directly to the video demo further below if you want.

Skype is pre-installed, but I still tried to install the latest version with Google Play, and for some unknown reason type “skype” would make Google Play crash just went I typed the letter “e” with the air mouse. When I tried the pre-installed Skype, I could register an account and login, but calls would not work. So I searched in Google Play again using the USB keyboard, and it let me update the app.

I could use the Echo services to test audio calls successfully, and I also successfully called another laptop for a video call.

I had no problem install the app from Google Play, and the first time I tried I got both the caller and callee videos on the screen, but subsequently I lost video on the Android TV box, but both video feeds would still show on the laptop, and audio was still working. So there may have been a network issue in one direction…

Duo is the latest one to one video calling app by Google, which is supposed to be very easy to use compared to something like Hangouts. SO I was eager to test it, but it’s incompatible with the TV box. [Update: I’ve just tried Duo on my phone ,and it requires a phone number, so that’s probably why it won’t work on any TV boxes] 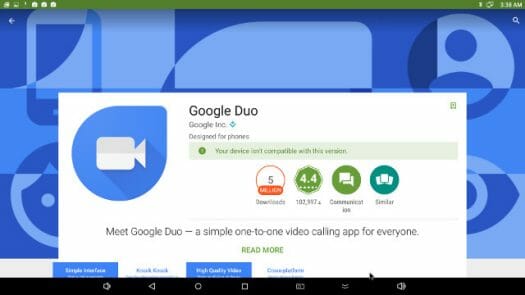 You can watch the device in action with the Camera app, Skype and Google Hangouts in the short video below.

I think my latest RK3368 TV box review was with Zidoo X6 Pro in October 2015, so it’s probably a good idea to check if any have changed since then by running CPU-Z and Antutu 6.x.

So with that faster CPU clock, we should expect a higher Antutu score, right?

Nope. The score was just 23,445 points, while this type of device should have a score in the 3x,xxx. I repeated the test again in case something went wrong, but the device only achieved 22,870 points in my second try. I also noticed audio noise instead of music, during 3D graphics benchmarks for both tests.

GearBest kindly provided Coowell V4 review sample, and they are currently selling it for $72.30 shipped. You’ll also find the device on Aliexpress for $68 and up, as well as eBay and Amazon US.

That is disapointment -it has a cam and mic inside- and for the M$-skype-app it is enough, but for googles own new ‘GOOGLE DUO’ their own playstore don’t akzept the instalation. It’s a cruel world outside the room.

@rebeL
I’ve just tried Duo on my phone, and it requires a phone number… So I think it won’t work on any TV boxes, nor WiFi tablets.

The duo needs a phone number only the first time you install it. Then on other devices you need only to log in with you google account, the other device can have another phone number it doesn’t matter.

I think that Google Duo can be manually sideloaded and installed and then use phone number to activate it and enter code when receive it at phone, but again no sense as tv box is not portable and when out of home cannot be in pocket

You can sideload the duo apk then register it with a google voice number to use it on non phone devices. You can only register it on one device, if you do it on a second it will deregister the previous device. Having GV SMS setup in hangouts will make it a little easier but shouldn’t be needed as long as the code can be entered.

.. that’s a terrible Antutu score, with mediocre marks all across the board, from memory to computation to graphics.

Generic RK3368 boxes typically score in the 35K range with good firmware and no heatsink. With heatsink they easily reach upwards of 40K (Antutu 6.2.0)

Thanks for the info

I have the same problems with this device, Play store crashes so I can’t update apps, The existing Skype crashes when I try to call. Plus the camera quality looks crap in the camera app. Currently I’m looking at returning this box but will try again tonight. I have tried with a keyboard and mouse but just can’t get Play Store to work! Went through the pre-loaded Kodi (although I’m only evaluating this box as a Skype TV alternative so only out of interest), practically everything doesn’t work although I suspect that’s illegal links being removed and I haven’t any… Read more »