HD23 is an Android TV box based on Allwinner H3 quad core processor that includes a 2.0MP camera and a microphone that should allow you to make and receive video calls. I’ve already taken some pictures of the device, and opened it to have a look at the hardware including the camera and microphone in HD23 unboxing and teardown post, so today I’ll specifically test the device’s camera and mic with Skype and Google Hangouts.

The device is made to connect to the top of your TV, so you’ll probably want to limit the weight on the back of the device, and I only connected the HDMI cable, the RF dongle for MINIX NEO A2 Lite air mouse, and the power supply cable. For the purpose of the review, I also connected a USB keyboard via the USB OTG adapter in order to take screenshots 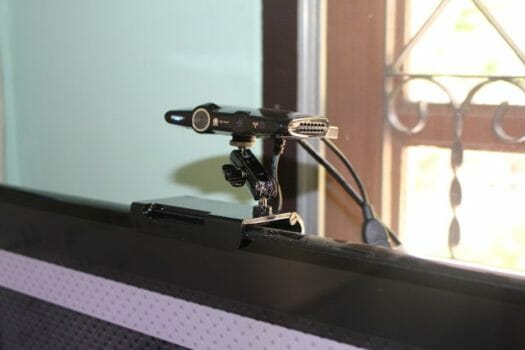 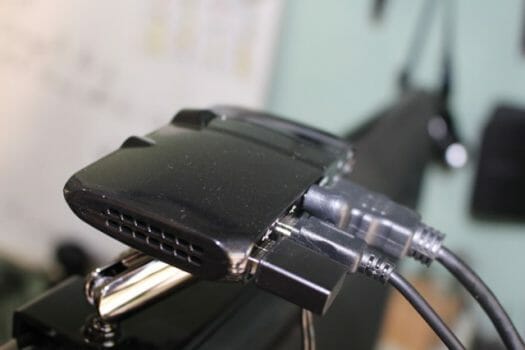 If you wonder how big the device would look on your TV, I’ve take a picture with the device connected to a 42″ TV (LG 42UB820T). 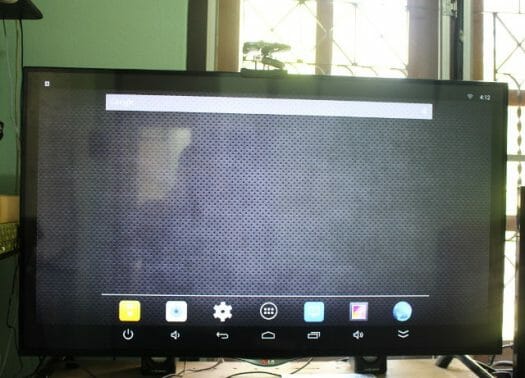 It’s fairly easily to adjust the mini PC to the direction and angle you need, but you’ll have to make sure you tighten the two screws firmly.

MX HD23 has a typical Android home screen, not really a TV launcher, but you could always install another one if you prefer. As you can see from the picture above, the device is set to compensate for overscan by default, so if you TV is already doing this, as in my case, you want to go to Settings->Screen percent, and adjust the slider to the max, or whatever value is best for your TV in order to get a full screen experience. Since HD23 has no Ethernet, you’ll have to setup WiFi too if you want to access the Internet.

The list of pre-installed app is shown above. If you click to see the full size of the screenshot you’ll notice the image resolution is 1280×720, meaning they’ve gone with a 720p user interface whatever video output you set in the settings, in my case 1080p50, but 4K30 is also supported. The Play Store worked fine, as I could install ES File Explorer and Google Hangouts.

I’ve also gone into About device to find a bit more about the system. The model number is TVBOX-H3, and it’s running Android 4.4.2 with Linux 3.4.39. The firmware is dated on November 13, 2015, and the firmware update app told me my firmware was up to date.

I’ve tested the camera with three applications: the included Camera app, Skype and Hangouts. I’ve checked the picture quality in the camera app, and considering my room is relatively dark, the quality is not too bad, and much better than the cheap USB camera I normally use for TV box reviews.

Taking an actual picture with the camera with save 1600 x 1200 photos. Here one sample for reference. It’s rather grainy and it would be pretty bad if the device was used as an actual camera instead of a webcam.

I then switched to Skype. I had not problem to log into the app, and make an audio test call with the Echo / Sound Test Service, and audio quality was quite good, and I find the device has a decent microphone. The video was fine and smooth too, but somehow the picture on the receiving end was not exactly the same as on the TV, with the lower part of the video cut. One thing you need to be aware of while doing video conferences on a TV is that you’ll usually be a bit further from the screen as usual, so you may have to come a little closer to the screen, as AFAIK there’s no option to zoom in.

Finally I tried Google Hangouts, and while I could sign-in, and make a call, the whole experience was not smooth at all with the video rendering at 1 to 2 fps or even less on both HD23 and computer (Ubuntu 14.04 + Chrome).

So while I find Skype perfectly usable on the device, Google Hangouts is not. You can see all three tests in the video below.

I’d like to thanks GearBest again for sending a sample for review, and if you are interested in such device, you could purchase it for $60.60 on GearBest [Update: Coupon HD23sV brings that down to $59.39]. It can also be found on Amazon US, eBay, DealExtreme, GeekBuying, Aliexpress, and others online retailers for $60 and up.

Can you have a look which camera module is used (by looking at loaded drivers)? I wonder whether that’s the same Galaxy Core GC2035 used with the Orange Pis?

Great test, always surprised this kind of Android box is not more widespread

Hello! Is this device rooted????!!! Very important for me!

Otherwise no sens to order..

@michael
Not sure, but usually there are always ways to root Android boxes.

@michael
I don’t have set it up anymore. But now that I think about it, I don’t recommend that you buy from this product.
At least two people have an MX HD23 that is stuck at boot time, and I’ve asked twice the firmware to GearBest, but the manufacturer (I don’t know who that is) refuses to provide the firmware files.

thank you for your advice!

however if you’ll get the firmware leave a message! just curious if there is any support from the manufacturer for this ”phantom” device or its a total crap!?

can you use this as an external camera for another android box?

Hi, do you know where i can download the firmware for the above device you reviewed please…

@stuie bee
I’ve already asked, and sadly the manufacturer does not want to released the firmware.

@stuie bee
I think I’ve never tried backing up the firmware. It’s just an Android device, so maybe you can try some of the methods listed @ https://www.wondershare.com/android/backup-rom-android.html

Thanks. for your help i will try that and a few other things as i am getting the very worst after sales customer service from GearBest and i would never shop with them again nor would i encourage anyone to buy from them either. if copying the stock rom works i will leave it on the site for your members to use if that’s OK.

@stuie bee
I had also kas GearBest, but they told me they could not released the firmware for that device. They’ve provided firmware for other devices, so I think the problem here is the manufacturer… I just don’t know who it is…

I have this device, sometimes problem when boot. it is like “hang”, so download the firmware from china website, flash it and normal until now 🙂
good product with cheap price ^_^

@diaz
Would you have a link to the firmware? I’ve never been able to find it in the past.

Hi cnxsoft, I tried to boot into to the boot loader to make take backup of firmware/rom but wouldn’t load into bootloader just went directly to factory restore automatically did Diaz get back to you with the link for the firmware

@Stuie bee
Sorry, no reply so I don’t have the link to the firmware either.

This seller claims to have updated the firmware, but when i asked for link, he replied: ” It has already been with the updated firmware(latest).”
Would be good to know if the boot issues are gone or not since i consider buying one.

@dev
One way would be to connect speakers to the AV port.

Hello.. Where can we find this Windows usb drive.