A few days ago, I discussed with somebody whether a file was cached by Cloudflare or not, and this involved getting the HTTP header, and checking for CF-RAY field to see if data is going through one of Cloudflare data centers. This can be done with curl:

In the command above, -s stands for silent so that curl does not show the progress meter, -v stands for verbose to show the header, and -o /dev/null is used to discard the packet load.

You can also use -I option (fetch the HTTP-header only) with curl, which – if all you need is the HTTP header – provides a cleaner output:

I also came across httpstat Python script recently via n0where, doing much of the same thing, except it also adds transfer statistics.
It can be installed by downloading httpstat.py, or better using pip:

Let’s try it with this very blog:

The header is the same as with Curl -I, and for good reason, since httpstat relies on curl, and all curl options (except for -w, -D, -o, -s, -S) can be used with the command line. This script can be useful if you are trying to benchmark and lower TTFB (Time To First Byte), or decrease overall download times from your server. 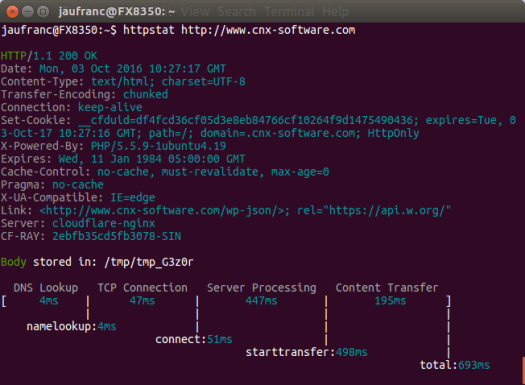 From the United States (Anaheim, Ca)