LPWAN standards such as LoRa or Sigfox allow you to transmit data over long distance, at ultra low power (up to 10 years on a AA battery), and for free if your use your own network (P2P or gateway), or a few dollars per years if you go through a network provider. The low cost is possible since those standards rely on 900 MHz ISM bands, meaning nobody has to pay millions of dollars to the government to obtain a license fee. Matt Knight looked at LoRa, and while Level 2 and 3 of the protocol (LoRaWan) has public documentation, Level 1 (LoRa PHY) is proprietary and the standard is proprietary. 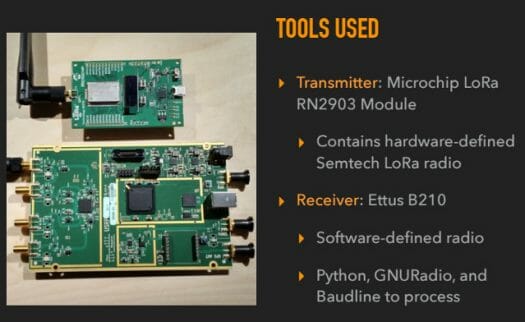 So he decided to reverse-engineer LoRa PHY using Microchip RN2903 based LoRa Technology Mote and Ettus B210 USB software defined radio, and software packages and tools such as Python and GNU Radio to successfully deliver GR-LoRa open source “GNU Radio OOT module implementing the LoRa PHY”.  He presented his work at GNU Radio Conference 2016 on September 15, and the video is worth a watch. He first explains why LPWAN IoT standards are awesome, the motivation about reverse-engineering work (mostly security), the hurdle (e.g. lies in documentation), the results, and work to be done.

You’ll find the presentation and the research paper on Github.

Thanks to Emanuele for the tip.

Another video explaining why Weightless-P is better than either Sigfox and LoRa because of higher spectrum efficiency -> https://www.youtube.com/watch?v=IDEnKwiG8xY

Would it run on an RTL-SDR? Where I live, there is a LORAWAN network, and the 3 basestations covering the whole city are in receive only. They are based on some Semtek chip, which is different from the client since it listens on different channels at the same time. Would it be possible to redo that base station with 3 rtl-sdrs?

@zoobab
In theory you could, but you’d have to do a lot of work on the current implementation as it only supports one spreading factor (SF8) and CR 4/8.

Considering a genuine LoRaWAN gateway can be had for about $150 I’m not sure this will be a priority anytime soon.

@Jean-Luc Aufranc (CNXSoft)
Isn’t it amazing how protocols that aren’t available on the market are always better?

@JM
Yes, I’m subscribed to weightless mailing list and receive emails regularly. They do have devkit and SDK, but only available to paid members. It’s just not possible to buy for most people right now.

Just curious where are you guys able to access narrow band spectrum? In the USA in NEW York state and city local government has reign and it’s limited to police and emergency use. Actually you DO need licensure from local government to access. Grrhh. USA the land of the brave but not so free.

If you’re interested in our take, please check out: