X-Gene 3 is said to offer 4 to 6 better performance compared to X-Gene 2, and match “comparable x86 processors in CPU throughput, per-thread performance and power efficiency, while offering advantages in memory bandwidth and total cost of ownership”. 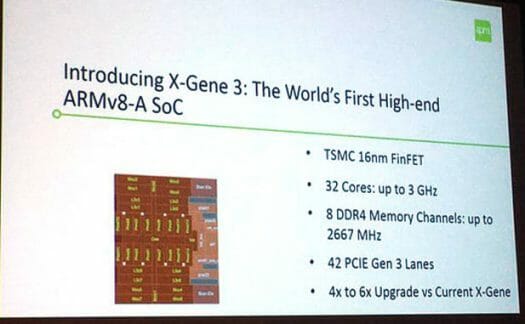 A white paper by the Linley group has some more insights about the performance:

The company expects the chip to deliver a SPECint_rate2006 (peak) score of at least 500 when running at its peak speed of 3.3GHz and DDR4-2667 and with some additional hardware and compiler tuning. This score is well ahead of that of any other ARM processor and similar to that of mainstream Xeon E5 processors.

In addition, the processor should achieve a single-thread SPEC_int2006 (peak) score of 24. Other CPU tests such as CoreMark and Dhrystone deliver similarly impressive results, outscoring leading ARM cores such as Cortex-A72 and custom designs from Cavium, Qualcomm, and Samsung. With eight DDR4 channels, X-Gene 3 also posts excellent scores on memory tests. For example, the processor scores 67.1GB/s on Stream Copy using DDR4-2133 and could exceed 80GB/s when it uses DDR4-2667.

They also compared X-Gene 3 SoC directly to Xeon E5 processor in the table below using numbers provided by vendors, or estimates, not independent benchmarks.

MACOM’s new SoC appears to have the edge when it comes to memory bandwidth, however, they note that X-Gene 3 lags Xeon E5 in floating-point performance, X-Gene 3 will still do well on integer-only workloads such as deep learning used for voice services (e.g. Alexa), image classification, and other tasks.

MACOM is now shipping X-Gene 3 to selected partners. Some publicly available documents for APM883xxx-X3 (codename for X-Gene 3) should eventually be available on APM website.

Via Hexus, and thanks to Tadej for the tip.

why ARM is eating 125W? … RISC is all about low power and low Logic Elements .. Hopefully chinese will make it less than 100$

@Varghese
On top of the two other answer above, they also have a much higher CPU frequency clock (3.0 to 3.3 GHz) than ARM SoCs optimized to run on batteries.

@Varghese
A multitude of cores, high-speed memory controllers and PCIe lanes positions this chips firmly out of the ‘low power’ ICs. And while RISC enables low-power designs, RISC is definitely not about low power – for a long while RISC designs were the fastest CPUs on the planet. And they are still competing – check out POWER8 and POWER9 products.

On a sidenote, that Linley Group paper mentions more than once that XGene3 is not competing on fp throughput. I wonder if they kept their 64-bit-wide SIMD ALUs from XGene1, or went 128-bit wide eventually.

Varghese : Hopefully chinese will make it less than 100$ Sure, that’s also what I would expect when I read ‘E5-2680v4 carries a list price of $1745, whereas X-Gene 3 will cost about a third less’ 😉 Regarding the 125W… that’s TDP (thermal design power) in this case already including the ‘South Bridge’. This is just a metric for server vendors to calculate PSU dimensions and heat dissipation. To make any use of such a CPU you would’ve to add at least memory (and since memory bandwidth is outstanding you would want to add a lot per CPU socket, eg.… Read more »

I was surprized it doesn’t seem to include 1G/10G/40G NICs but on the other hand, when they are integrated you never have enough of them so it makes sense to plug them to some of the 42 PCIe lanes in the end.

What about the type of core used? “Custom” doesn’t say much (probabably not like A53’s though, LOL), nor does it reveal L1/L2 sizes.

@Willy I imagine it was two things. 1. creating a low-cost product that fits as many markets as possible. 2. keeping the complexity of the chip down and reducing possible points of failure. Intel has a robust and proven ethernet mac(s) they can graft onto their chips, Macom does not (they make networking components but not MACs from what I can see). I would not want to be the engineer having to tell management that our flagship product has to be recalled because of a serious fault with an on-chip component that we didn’t really need (like you said, just… Read more »