ODB-II Bluetooth adapter and head-up displays to monitor and diagnose your car have been around for a while. I actually got two models to use with a Toyota Avanza and Torque Lite app, but never managed to make it work with my phone. Macchina M2 board is doing much of the same thing and more, as it is open source hardware, and supports more communications protocols including GPS, WiFi, 3G/LTE,  BLE, and Ethernet using XBEE boards. 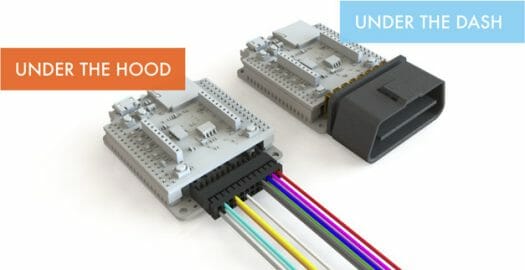 Once you’ve done the hardware setup – very easy with the ODB-II connector, and a little bit more difficult under the hood -, you can hack your car away, programming it with the Arduino IDE to gather RPM, speed, diagnostics data, etc…. This will also allow you it to tune it, or even control it remotely, for example starting it with a mobile control app. If you don’t want to program the board, ELM327 emulation will allow support for popular apps such as Torque for Android, or Dashcommand for iPhone, Android, and Windows App. The developers also uploaded some video tutorials on YouTube, some guides can be found on M2 Wiki, and one of the member of the team wrote a book called “The Car Hacker’s Handbook“.

Macchina M2 launched on Kickstarter a few weeks ago, and the project has already raised over $90,000, surpassing its $25,000 goal. Rewards start at $45 with M2 interface board only, which requires you to add your own MCU/CPU board, but most people will be interested in the $79 pledge to get a complete Macchina M2 board including the Atmel SAM3X board. Shipping is free to the US, but adds $15 to the rest of the world. Deliver is scheduled for July 2017.

Thanks to Thomas for the tip.

I would to order I love it

Can I use it in Europe?

@Milan Mackovic
Yes, as long as your car is not too old.

How can I order it?

Can you email me [email protected]

@TC
German cars should have the OBD-II connector too. I can also see Amazon DE and eBay DE selling ELM327 Bluetooth devices, so it should be legal, no?

@leroy richardson
@Milan Mackovic
You can “buy” it on Kickstarter. The link is in the post. It will only ship in July (at the earliest).