Most of us now listen to music on the go using our phones, but once upon a not-so-distant time, portable MP3 players were a popular way to listen music. They have not completely disappeared, and Brad Linder of Liliputing needed some for one of his projects, so he bought four inexpensive MP3 players on GearBest with prices ranging from $1.51 to $3.75 to check them out. It turns out the one with the best audio quality and sturdiness was Simplicity Fashion Pocket MP3 Player going for $1.51 shipped. 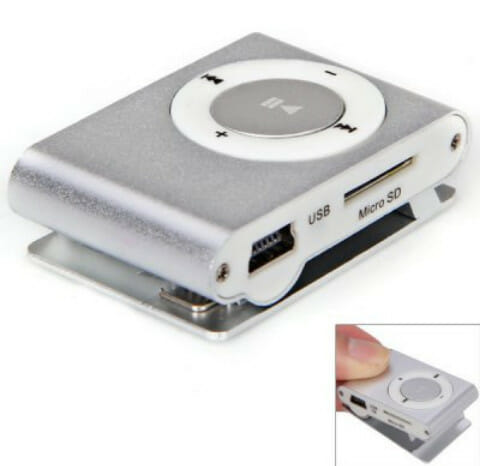 So let’s see what we get for that price:

The package only includes the MP3 player, and you still have to provide your own mini USB to USB cable, headphone, and micro SD card. Brad compares all his four MP3 players in the 5-minute video below.

Since $1.5 is not that far from $1, I decided to look for even cheaper MP3 player, hopefully close to, or under, the $1 mark.  It was not difficult to find. I started on eBay where I could find a $0.99 MP3 player including shipping, but you need to select the pink model to get that price, as all other colors go for $1.38. It’s much easier to find sub $1 models on Aliexpress, including an 81 cents MP3 Player, again including shipping.  At those price, they could even be used as promotional items at event that you’d give away to potential customers. Just don’t expect them to last for a very long time.

I’d buy that for a dollar!

these break really fast. talk about weeks rather than months

These and Radios turn up in pound stores in UK, ie Poundland and Poundworld .

Can any of them play FLAC? Since these days, I always opt for lossless. I do have a good HiRes audio player (Fiio X1) but I’m wondering if you can get lossless audio support at such low price levels…
Also, these with microsd/sd support usually top out supporting 32Gb or lower capacity cards..

If you’re in the US, Trump would kill you.

Without studio headphones and a dedicated headphones amplifier (or a stereo + tweeters and subwoofer), the frequency ranges that high bitrate lossy formats compress \ drop are inaudible anyhow.

Lossless is for archiving and studios. Lossy is all you need with normal (non-studio frequency response) headphones. And the matching MP3 player has no reason to cost over a dozen dollars.

How good would the sound be? I mean the price is unbeatable and I can even accept that they would break easily, but I want quality sound.