Slice is a media player based on Raspberry Pi Compute Module, and EzeeCube Quad is media hub powered by Freescale i.MX6 Quad, and an upgrade to EzeeCube based on i.MX6 dual, which was successfully funded. The underlying hardware between Slice and EzeeCube is much different, but both devices have a lot in common. They are both media players currently being crowd-funded respectively in Kickstarter and Indiegogo, both comes with an internal hard drive, run XBMC, targets typical end-users (rather than tinkerers) and are somewhat pricey.

When I first saw Slice, all I could see was an Raspberry Pi module, put in a case with an internal hard drive bay, and lots of pretty RGB LEDs, and with an air mouse sold for an inflated price of 114 GBP ($190 US) without hard drive or 179 GBP ($300 US) with a 1TB drive, with admittedly some cheaper early bird pledges, and I did not think many people would be ready to pay a premium price for a device powered by a low-end processor, and decided to skip it. But I was wrong to underestimate to power of the Raspberry Pi brand (R-Pi and Pimoroni members are part of the team), and they’ve already fully funded, after raising over 104,000 GBP (~$173,000 US), and the first stretch goal (Free Wi-Fi!) has been reached. 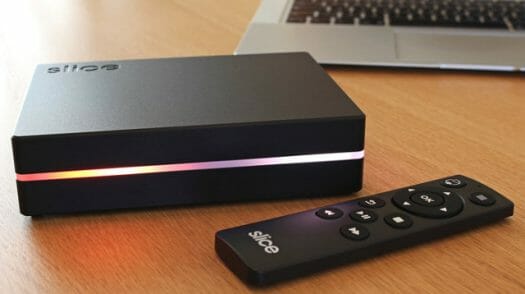 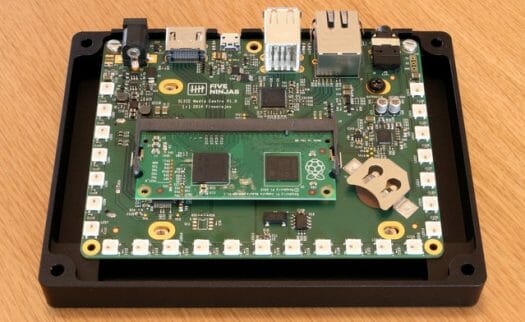 The box runs XBMC with a skin that simplifies user experience, and with different color themes and backgrounds. Video files and other media can be loaded to the Slice simply by connecting it your computer via USB and copy/paste files as if it was a simple USB flash drive. You can have a better grasp about the user interface in the video embedded below.

The company, FiveNinjas Ltd, launched a Kickstarter campaign for the project. As mentioned in the introduction, it is already successful with 36 days to go and close to 800 backers, and you can now pledge for one for as “low” as 114 GBP (~$190) without hard drive, and 169 GBP (~$280) with a 1TB hard drive. The perks include the media player, a remote control with a USB RF dongle, a power supply with multiple connectors, an HDMI cable, a USB cable, a n instruction manual, a protective carry bag, and depending on the perk, a 2.5″ 1TB  hard drive. Shipping is free worldwide with delivery scheduled for November 2014 to December 2015 depending on the chosen option.

EzeeCube is a much more powerful quad core device, and features stackable layers (EzeeStacks) allowing for a Blu-Ray player, and a total of 10 TB storage.

The device runs embedded Linux built with Yocto, and a custom version of XBMC.

Since the company has already raised close to $150,000 from their previous campaign for the dual core version, they already have the funds for production, which explains why the new Indiegogo campaign only has a $500 funding target… EzeeCube Quad is available for $349 including a 2TB internal hard drive. Shipping is $15 outside of Hong Kong, and delivery is expected for March 2015. There’s also a $49 “EzeeTuner” a USB tuner to watch and record TV on the internal storage ([Update: I asked and: “Right now only off the air all standard, after we finish testing, we will also support dvb c“]), a $49 Retrogame EzeeStack for Nintendo and Sega game cartridges, and Blu-Ray and 2TB hard drive EzeeStack expansions for respectively $99 and $149. If you had pledge for a dual core version in the previous campaign, and wish to upgrade to a quad core version with 2GB RAM, 2TB HDD, you can do so for $99.

If you had to chose, what would you prefer? The Raspberry Pi powered Slice, the quad core EzeeCube, or none of the above?

Thanks to Harley (again) for the tip.

Costly case for Pi. The idea is nice but they could have used something more powerfull than Pi. The second one.. looks way better in terms of power and expandability.

but to answer… none 🙂 I am fond of my ambilight which is plugged straight into my devboard/media player, together with security camera and a couple more sensors…

As nice as it is the R-Pi is pretty old at this point, the Freescale iMX6 would have been so much better for the Slice as features/performance wise it’s very close to PC x86 XBMC.

With all the iMX6 devices in the pipeline and already available like the Cubox-i/Hummingbird, the Slice is a hard sell especially to AV snobs who want match frame rate 24hz, BD decoding and HD audio bit-streaming, the R-Pi can only do those partially whereas the iMX6 can do it all.

As mentioned, this is the second hardware solution (after EzeeCube) designed especially for XBMC (not counting Pivos as I guess gets their latest device from Geniatech).

Unlike EzeeCube, I don’t see anything special that this device brings to OSS solution that it’s using.
EzeeCube brings to the table personal photos, videos and contacts syncing (added to XBMC DB) and supposedly will improve the ease of the intial PVR backend setup ( http://stephan-rafin.net/blog/2014/06/05/ezeecube-an-exciting-mediacenter-and-photo-organizer/#comment-2727 )/