FriendlyELEC has launched a new accessory board for their NanoPi NEO / NEO 2 / NEO Air boards with UNO Dock V2.0 board compatible with Arduino UNO board thanks to its Microchip ATMeaga328P MCU and compatible headers, and also equipped with headers to plug a NanoPi NEO board. 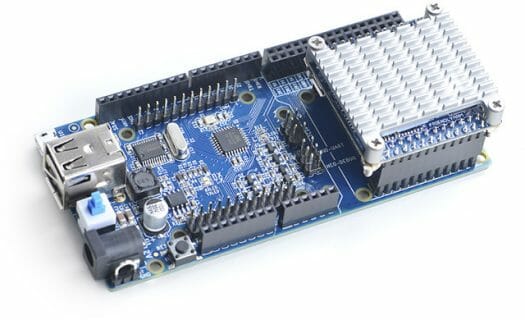 The system would be great if NanoPi NEO boards actually had an HDMI output port, as it would be an all-in-one Arduino development platform that does not require an extra computer, just like UDOO NEO, but cheaper. But sadly that’s not case, so you still need a separate computer to program the board, and NanoPi NEO board here is mainly used to process data from sensors and modules connected to the Arduino and NEO headers, potentially sending & receiving data to/from a cloud service.  In some ways it’s similar to NanoHAT Hub for instead of being designed for Groves modules, it’s designed for Arduino Shields. You’ll find some more details in the Wiki (Chinese version only for now). Based on the schematics, NanoPi NEO board and the Microchip MCU communicate over I2C.

So, Yun the hard way?

Yun the Hardway is my favorite New Wave band.