A South Korean company has created Dot smartwatch specifically designed for the blinds and visually impaired, as it supports Braille language through 24 dots that move up or down depending on the data to show. Like other smartwatches, it will also pair with a smartphone, and received notifications over Bluetooth to Android and iOS smartphones. 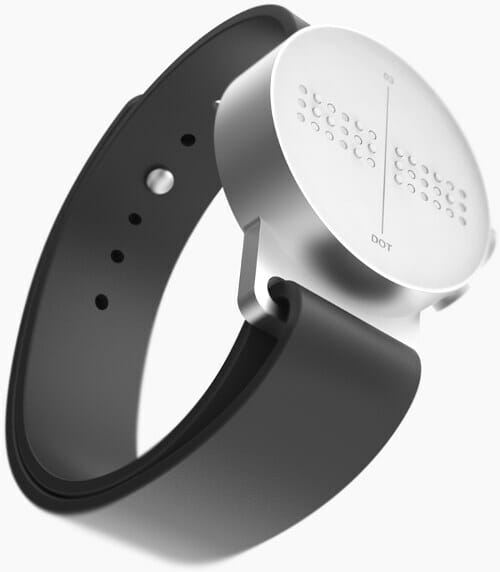 This is all made possible through the company’s dot rotor technology that allows to move the little dots up and down. Time display is easy as it uses the four dot cells to display the number for hours and minutes: one dot, two dots, three dots and four dots = 12: 34. When people get notifications, the watch vibrates, and then the message is displayed in Braille via the dots. Since there are only four dot cells, I assume the watch will detect which ones you are already read with its touch sensor, and move to the next “characters” for the rest of the message.

The watch currently supports Korean and English Braille languages, but Japanese, Arabic, French, German, Italian, Polish, Swedish, Spanish, Portuguese, Danish, Dutch and Chinese versions are coming soon. The dot rotor would be great for some kind of Braille e-Reader, and the company is working on Dot Pad to do exactly that to be released in 2019. I’m also expecting the technology to be used in other applications where you may have to show / hide tiny physical buttons depending on context.

The Dot Watch has started shipping recently, and is available for pre-order for $290. You’ll find more details on Dot website (which would deserve some navigation improvements).

The render shows a watch with 6 cels/36 dots.

@Piper
I also noticed that, so I’ve asked then on their Facebook page:

To address your concern – you are correct- the Dot Watch consists of 4 cells and total of 24 dots. To clear out, it is the exterior design of the Dot Watch screen that makes its visual look the way it is.

If you check the video, you’ll also see some dots on the sides never move. One the picture, the 1st, 4th, 9th and 12th columns are also down, so those are just used for “style”.

Whatever happened to “Haptic” touch/feedback devices? Those were supposed evolve into thin Braille interfaces. Heck they didn’t even show up in regular every-day interfaces! More Marketing Hype I guess…

how can i purchase watch?